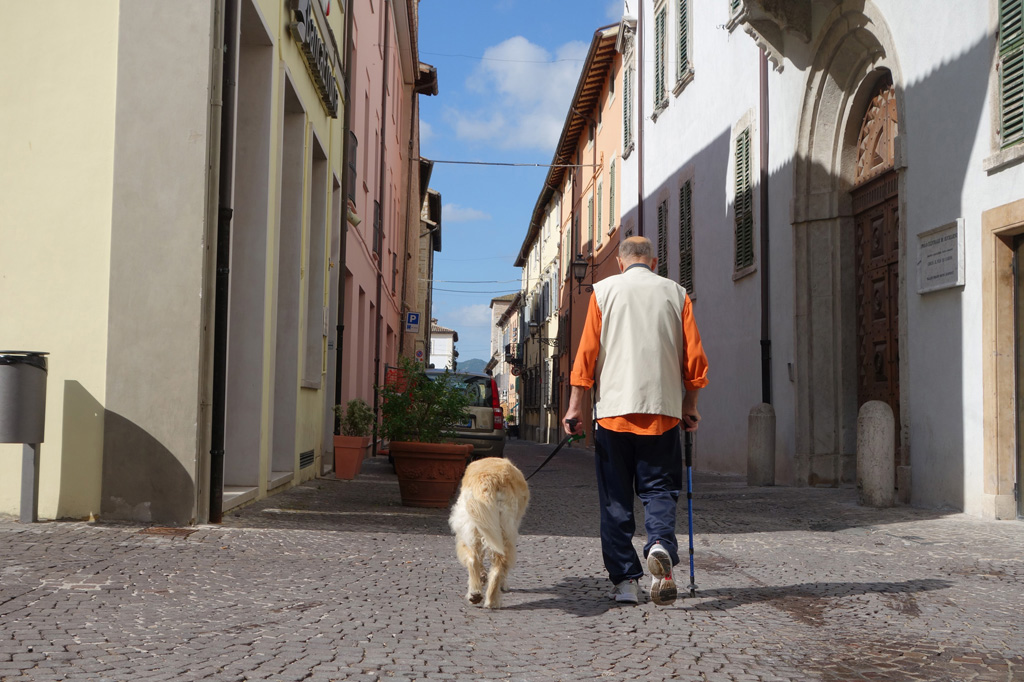 Story and photos by Sophie Imbuelten

He sits quietly on the wall, placing his cane within reach but knowing that he won’t need it anytime soon.  A friend with patient, obedient eyes accompanies him.  She stares up at him; he strokes her chin with the gentle touch of an adoring father.

“I cannot imagine life without her,” he says. The tears pooling in his eyes confirm the raw emotion that overtakes Sandro Gelso as he describes Kira, the golden retriever who has quite literally been his right hand for the last seven years.  “I had a dream the other night. Someone offered me $5 million for her, and I told them no amount of money would ever be enough.”

Sandro, a native of Cagli, Italia, lives a simple life. He and his wife, Vivienne, raised two sons in this town. Enrico, 30, and Marco 31, both remain in Cagli .

Sandro made his living as a toll taker, and after 38 years spent working the same booth, he retired in 1996. Now he says he’s happy to play the role of the old man with his dog.

Dogs have always been a part of Sandro’s life, but he says that he and Kira have a special bond.  “She is the only kind of dog for me, kind and soft, extremely intelligent and obedient,” he says.

Those qualities have proved to be irreplaceable to Sandro. Three years ago, he was diagnosed with severe arthritis. He takes cortisone and uses ice to ease his pain. Kira has become more than just a companion.

“She senses when I am in pain, and she helps to ease my suffering,” he says. As he talks, Kira nuzzles his hand that is resting on his knee, she begs for a gentle scratch behind her ears. Sandro gladly obliges her.

Daily life for Sandro has a comforting, predictable rhythm. Every morning, he rises at 7:30. By 8, Kira reminds him it’s time to go for their morning walk. Making their way down Via Lapis, Kira never outpaces Sandro. Making certain to always remain directly by his side, she matches her paws to his steps .Together, they greet friends and neighbors, Sandro extends his hand; Kira wags her tail, inviting passersby to pet her.

After returning home for lunch, Kira stretches out on a patch of lawn in the garden. Occasionally, she entices Sandro to play ball with her. But when 4 p.m. strikes on the clock tower, Kira and Selso head to the piazza to join the other men on the wall. There, they share in the ritual of discussing daily gossip and news.

He says if it weren’t for Kira, other people might not notice him. “She draws people to her like a magnet,” he says.  “And I’ve even heard her called the unofficial mayor of Cagli.”

Up until a few years ago, Kira was as friendly with other dogs as she is with people, but a confrontation with a large, aggressive dog changed that.

“We were in the piazza, and a dog came out of nowhere and attacked her. Actually, he had her neck in his mouth,” says Sandro, his face becoming stern and his voice rising as he recalls the incident. “I was so angry. I took my cane and beat him with it until he released her.”

Clearly, Sandro is as protective of Kira as she is of him.

As the sun begins to drop, casting a shadow on the piazza, the clock tower bell tolls, reminding Sandro that it is time he and Kira begin their walk home. Foot by foot, paw by paw, they keep a synchronized pace, a clear reminder of the beauty of a friendship between a man and his dog on the streets of Cagli.