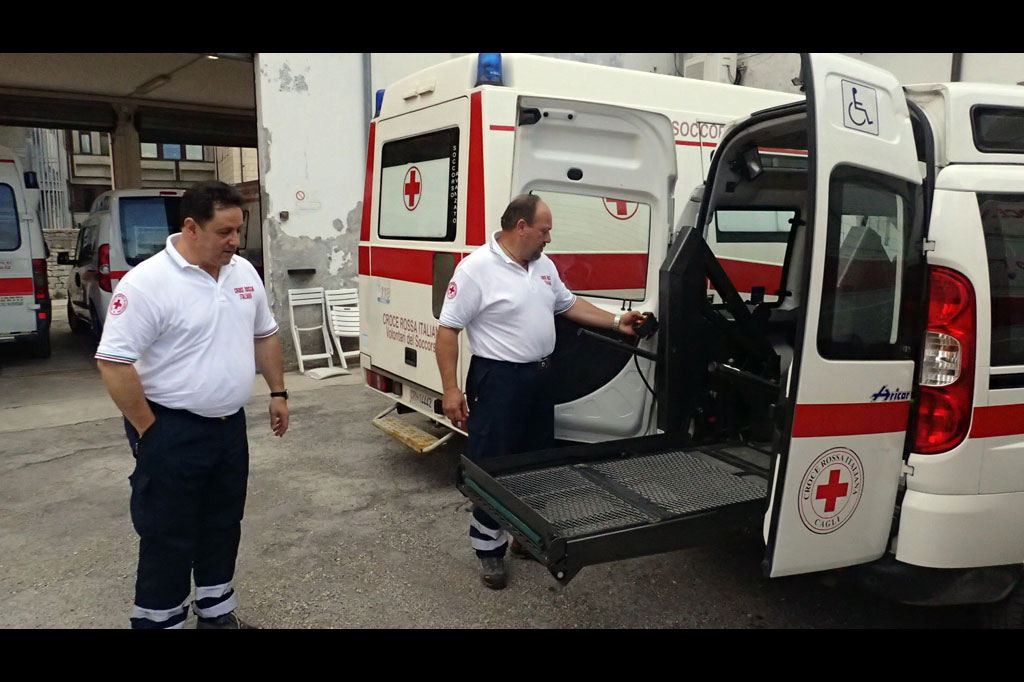 Story and photos by Kevin Sexton


Situated beside a main road in the ancient community of Cagli, Italia, sits an unassuming, sand-colored building with stripes of white, splashes of red, and three, currently closed, garage doors. This is the home of the Italian Red Cross, Croce Rossa Italiana.

Croce Rossa Italiano is home to 60 people who each day volunteer time and energy to help others. Many within the organization work a paying job by day and provide their knowledge, skills, and time to serve those in need after 5 p.m. Filippo Torri is currently the longest-serving individual in this chapter of the Italian Red Cross.

The Italian Red Cross responds to many situations—nearby and around the world. The local team’s response area is large, including Bologna, which is 150 miles from Cagli. Much of the local work involves taking patients to cancer treatments. In addition, the Red Cross hosts safety training for community members.

Recently, the Red Cross organized a training to teach fire safety in local schools, Filippo said. Volunteers simulated a fire evacuation for the students so they could practice how to respond in an emergency. They learned safety techniques as well as survival skills. They also practiced how to exit the building in an emergency.

While Cagli is usually a quiet town, Filippo says, during the annual beer festival, the town becomes more lively and calls for assistance increase.

When not performing work in the community, the 60 volunteers spend time answering the phone and sharing dinner. Volunteers are able to enjoy camaraderie while waiting for the next 1-1-8 call, which is the equivalent of 9-1-1 in the United States.

Individuals interested in volunteering time for the Red Cross may begin serving at age 14. The young volunteers provide many of the same services; however, their focus is teaching safety to fellow school students such as wearing seatbelts in the car or a helmet when riding on a scooter.

In addition to helping locally, the organization participates in relief efforts around the globe. Many local volunteers recently returned from assisting with relief efforts in Nepal after the recent earthquake. Some of these individuals had previous experience with earthquake relief as Cagli served as the command center for efforts to assist the people of Assisi in 1997. In 2012, the chapter also gave assistance to the people of Emilia-Romagna after an earthquake in Northern Italy.

When traveling outside the local area for relief efforts, Red Cross volunteers receive financial support from the government. Recently, local volunteers drove a dying 18-year-old man from Cagli to his hometown in Bulgaria. The trip took 50 hours—the longest drive volunteers had taken. The trip allowed the young man to die in his home instead of nearly 2,000 kilometers away.

The journey to Bulgaria is testament to the dedication of Red Cross volunteers such as Filippo.