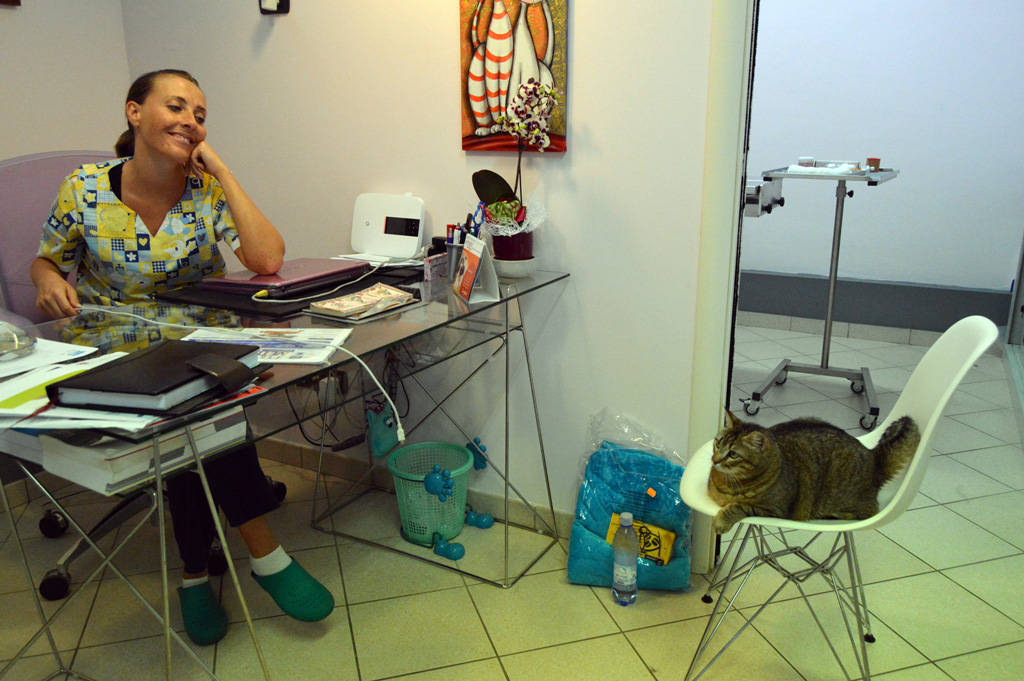 Story and photos by Stephanie Jentgen

Two large, luminous green eyes surveyed the clinic’s exam room as Trilly, a three-legged cat, positioned herself across Dr. Cecilia Copparoni’s laptop. “This is her place,” said Cecilia. “She lives here.” Smiling, the vet stroked her pet, chuckling when Trilly nudged her hand to continue when the caressing stopped.

Two years prior, Trilly arrived at Cecilia’s veterinary clinic. She was clinging to life after the steel jaws of a trap twisted and mangled the cat’s right front leg. Frail and less than a year old, the traumatized kitty won the doctor’s heart. After amputating what was left of the leg, Cecilia nursed Trilly back to health. Now the gray and brown tabby lives at the clinic and plays the role of welcome committee. The cat, part of Copparoni’s four-feline, four-dog family, is obviously adored.

“I have a heart for animals,” Cecilia said with a smile. “Since four years of age, I knew I wanted to care for animals. It was a dream.”

Her dream has come true. Six years ago, Cecilia earned her doctorate and opened her practice, called Ambulatorio Veterinario, near the ancient Via Flaminia in New Cagli. Each year she examines, vaccinates, microchips, diagnoses, and surgically treats more than 1,000 animals, mostly dogs, cats and rabbits.

“It’s not easy for animals in Italy,” Cecilia said. She explains that while many families own pets—for companionship and work—most families don’t have extra money for extensive animal care. She works with her clients to keep their pets healthy, even when money remains tight.

This devotion to her patients keeps the young doctor busy. As one of the only small animal surgeons in the area, she sees patients six days a week, taking Sundays off unless there is an emergency. Cecilia even makes early morning house calls for anxious pet owners who live in the mountains surrounding Cagli.

On this warm June day, a steady stream of dogs and their owners flowed into the clinic. A few settled into the clinic’s waiting room but most stood patiently outside where their pooches engaged in the ritual canine greeting of sniff and nudge. Remaining in the examination room during each visit, Trilly watched the ebb and flow of animals and people.

A bell announced the arrival of Cecilia’s next patient, a 4-week-old pointer hound huddled in a box carried by her owner, Federico Natticho. Setting the box on the exam table, Federico explained that the tiny, unnamed pup had walked in front of him, and he had stepped on her. He shook his head as if to erase the image of what happened from his mind. Now, the puppy limped badly, and he feared he had broken the dog’s leg.

The vet nodded and gently lifted the puppy out of the box and onto the examination table. Dr. Copparoni tenderly pressed the dog’s hips, moved the puppy’s legs, and watched her limp around the table. The pup whined softly, which elicited concerned pats and soothing noises from her owner and the vet. Even Trilly stretched to keep an eye on the little dog.

Though not broken, the injured leg caused the pup great pain. Cecilia administered a shot of sedatives just under the puppy’s skin, then cradled the pup against her. The dog snuggled close and quickly relaxed, her small floppy ear pressed against Cecilia’s heart.

For now the puppy was comfortable, and both the owner and Cecilia smiled.