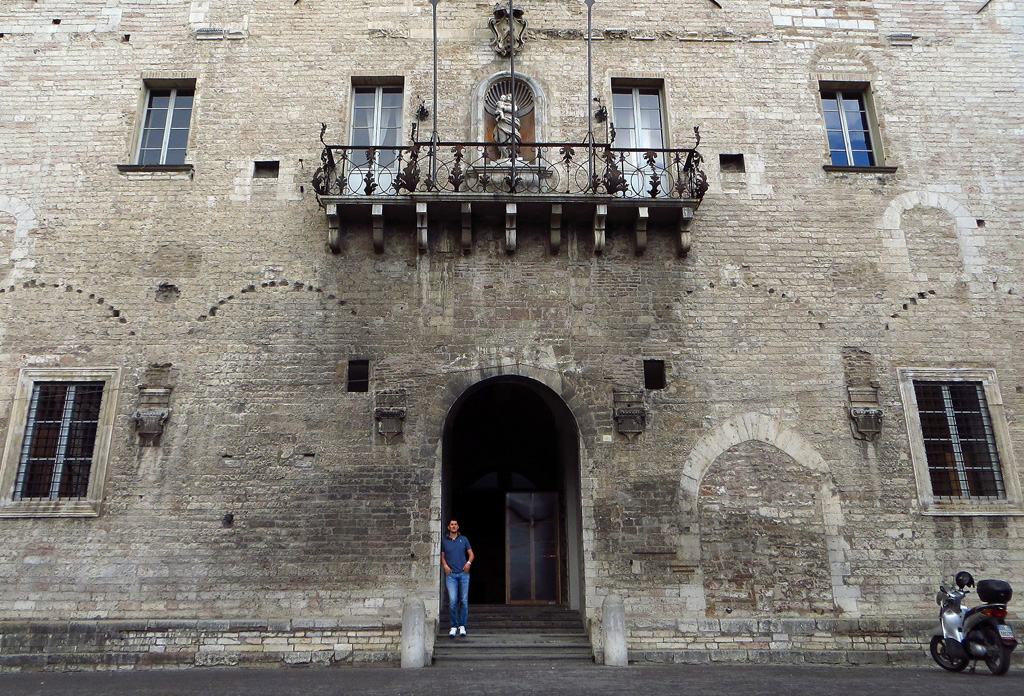 Marco Valeri: An Ambassador for Change


Story and photos by Lisa Becker

These days, many people who live in Cagli, Italy, know Marco Valeri.

Leaning back against the grey stone façade of City Hall, Marco admits, “I wasn’t always popular. Well, not popular, but familiar to the people of Cagli.” But once he ran for a place on the Italian town’s Consiglio Comunale or town council, people began to recognize and acknowledge Marco as he walked around Cagli.

Marco wasn’t born in Cagli, so when he moved to Italy as a teenager, he wasn’t initially comfortable in the city or accepted as an Italian. In fact, Marco spent many of his formative years outside Italy.

Marco’s mother was born in Puglia, a region in the heel of Italy’s boot, and his father was born in Cagli. Like many young people in the late 1960s, both of Marco’s parents left their home country at 17 to look for work and the promise of a better life in Shauffhausen, Switzerland. They eventually met and had two children, Marco and his sister, Ersilia, and built a life in their new country. In 1996, when Marco turned 17, his family decided to move back to Italy. He was excited to return to the place he had never lived but always considered home, bella Italia.

Education has long been a passion for Marco. Growing up in an Italian household in northern Switzerland, he spoke Italian at home and German and English at school. Despite being unable to understand the German spoken around him, he loved his first days of school in Shaffhausen. He learned quickly how to communicate with the other students, becoming bilingual, then trilingual. Many other Italian families had also immigrated to that region of Switzerland, so Marco grew up in an Italian community, wearing the red, white, and green of the Italian flag and taking part in Italian traditions.

After returning to Italy from Switzerland, Marco began high school at 17. Three years older than the traditional Italian students around him, Marco felt like a big brother to his classmates. He spent the next five years studying the classics—Latin, Greek, ancient civilizations, and literature—and developed a foundational knowledge that would take him anywhere he wanted to go. At that time, military enrollment was still required, so he devoted the next year to the Italian Army.

When he returned to Cagli at 23, Marco finally began his first undergraduate degree in foreign languages—German and English—in Urbino, a small university town not far from Cagli. Marco’s love for the United States was born when an international scholarship sent him to New York state where he taught Italian for four semesters. Despite the many hours he spent at work, Marco also began a master’s degree in businesses administration. He then transferred those credits back to his school in Urbino.

Today, Marco works as the export manager for Vietreria Rondina, a glass manufacturing company for the furniture industry. He says he enjoys his job and is proud to be part of a small, family-run company. He believes that that the many small companies throughout the country provide strength to the economy.

Although he enjoys his career, Marco’s dream is to be a professor, but becoming a teacher can be difficult in Italy. The system requires a person to earn “points” by substitute teaching and then working his or her way up. Early on, the pay is low, and Marco needs to provide for his family. “I felt great when I was teaching,” he said, adding that he would like to teach again. “Teaching was the missing part of myself.”

Marco’s face lights up when he talks about his family. He and his wife Daniela have four children—a 4-year-old, a 2½-year-old, and 1-month-old twins. He and Daniela want their children to have many opportunities when they grow up and would like to see them stay in Cagli. Marco says he wants to spare them the choice his parents both made when they left Italy so many years ago. This desire encouraged him to get involved in the city.

In 2014, Marco was elected to a five-year-term on the Consiglio Comunale. He ran on behalf of a group called Insieme Per Cambiare, Together For Change. They are not a political party, Marco says, but a group of people who want to make a difference in Cagli. The group was successful in its efforts to change the face of the council. Marco became a spokesperson for Insieme Per Cambiare and an assistant for Cagli tourism. Although he is not an official ambassador of Cagli, Marco’s education, travel experience, and talent for languages make him an unofficial representative. His service to the community fulfills his passion to do something more for the city he loves, he says.

One evening in June, Marco sat at a blue table in City Hall, high above Piazza Matteotti in central Cagli. Around the table, seven other men and women had gathered who were also interested in improving life in Cagli. The group of eight is kicking off a sister-city project between Cagli and Spokane, Wash. Marco’s affinity for languages allowed him to move elegantly from Italian to English and back again as he choreographed the discussion across different cultures and languages.

The members of the sister city committees from Cagli and Spokane all have at least one thing in common: They want to transform their passion for their own cities into a relationship that benefits everyone. “I am passionate about the place where I live because I want to make it a better place for my children and the people of Cagli,” Marco says. “It is a great place, and I love it here. I want my children to love it, too.”