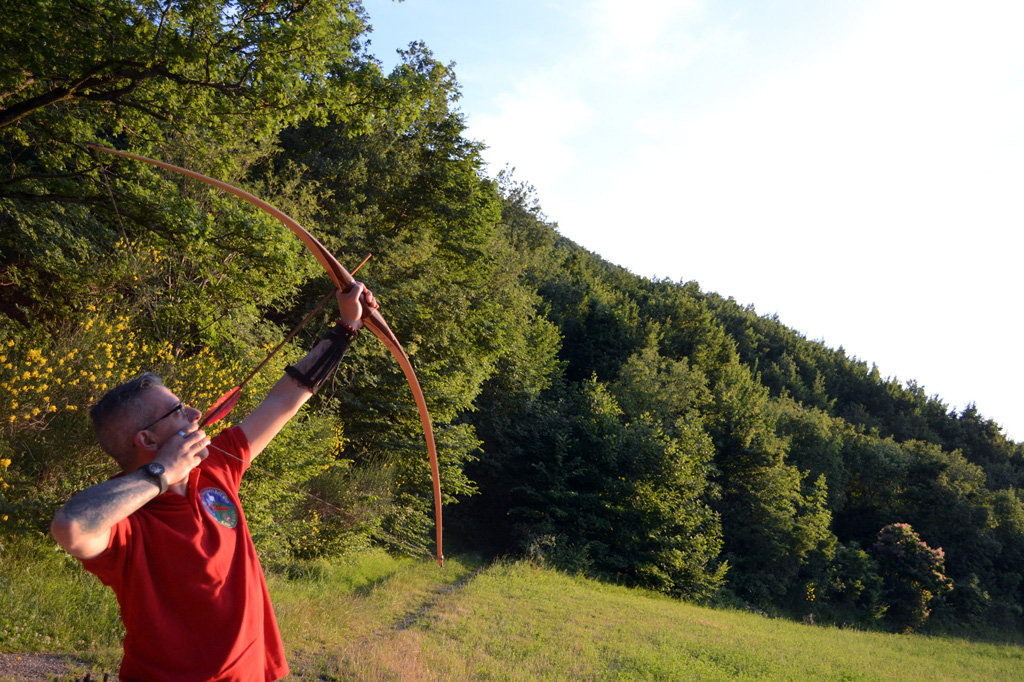 Story and photos by Shea’lyn Swan

Walking through the hills of Cagli, Italia, Stefano Barzotti stops, pulls a red-and-white arrow from his quiver, anchors the arrow in its nocking point, and raises his bow to the target.

Pulling the string of the long bow, he takes aim, breathes softly, and once focused, releases the arrow. As the arrow glides through the dimly lit forest and meets its aim, Stefano relaxes as he acknowledges that he has accomplished the goal—an accurate aim and center shot into the target drawing of a turkey fastened to a large, round, bail of golden hay. Stefano’s friends and club members commend his accuracy. They joke that if everyone makes the shot, they can “eat dinner,” as if to say they all will starve if they miss.

In 2006, Stefano placed first in le Marche’s regional tournament and became nationally recognized as an archer at the Italian level. However, all of this would not have been accomplished if it were not for the camaraderie that began at the Arcieri dell’oca—Archers of the Goose, a club that draws its history from an archery festival from the middle ages.

Stefano is one of 20-plus individuals who belong to the club. As children, watching cowboy movies, “Braveheart,” and “Robin Hood,” Stefano and his friends decided they wanted to be like the great archers they saw on film. At the age of 25, having never touched a bow, never been taught the art of archery, Stefano and his friends took a workshop.

For Stefano, archery is a hobby that offers him bragging rights more than competition. He is not interested in using bows and arrows to hunt. While Stefano has done well in the regional archery circuit, he is more interested in continuing the tradition and bonding with his comrades.

The bows Stefano and the club members use are made from a variety of fibrous woods such as bamboo, elm, and hickory. Each archer chooses his bow carefully. Stefano and his friends buy from a bow maker in Rome. The untrained eye might overlook the complexities of the woodworking; however, upon inspection, the bow yields intricacies of layered beauty. The curve of the wood, formed in the shape of a “D” and roughly the same length as the archer, allows for a long draw—to the cheek—and is quieter as the arrow leaves the bow.

Each archer chooses the color of the arrows’ feathers, which are called fletching. During medieval competitions, the arrows are left in the targets after each archer completes three rounds. Colored arrows allow the judges to identify the archers and properly score results. Currently, the members of the Arcieri dell’oca are working toward qualifying for the national team, with a competition scheduled in late June in Fabriano, Italy.

Stefano works evenings as a bartender at the Caffé de Teatro, in Cagli. He says he enjoys archery because it helps him “get away from the bar scene.” But as he talks, he demonstrates in his tone the reverence he feels for the sport. For Stefano, being part of a tradition dating back more than 500 years is what fuels his passion for archery.

As the sun begins to set in the hills, Stefano draws his bow to the sun, taking a stance in a “Braveheart”-esque fashion. Releasing the arrow, Stefano watches the fletching soar toward the sun in a grand arch. In that moment, his face reveals the satisfaction archery brings to him.