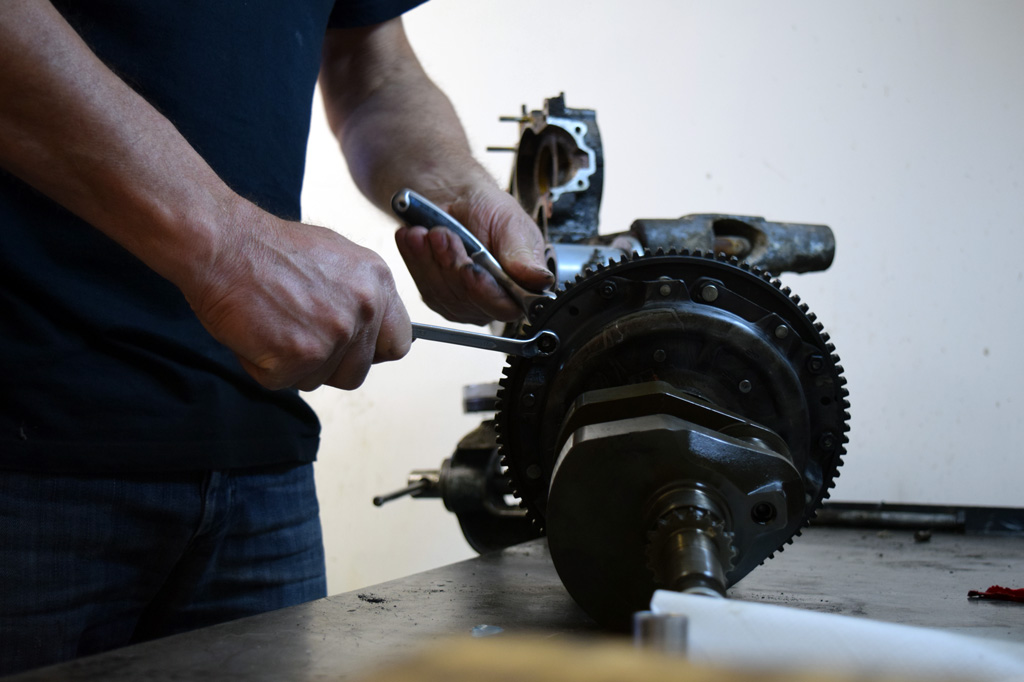 The Motorcycle Man of Cagli

Story and photos by Corey Tanaka

Inside Roberto Baleani’s motorcycle repair shop, Moto Baleani, the sputtering sounds of a malfunctioning moped compete with a blaring Italian radio; the smell of motor oil mixes with
exhaust fumes.

Lorenzo, an aspiring mechanic, begins working on the broken moped while Roberto examines his student’s work and technique. In Cagli, Italia, Roberto and his son, Andrea, fix and ride anything with two wheels and an engine. Roberto is a man of few words—he lets his experience and accomplishments do the talking.

Roberto works on a variety of two-wheeled vehicles. A work area connected to the main garage contains a few of Roberto’s projects. A 45-year-old Honda Super Sport sits next to a moped with its engine removed; they both await repair.

As the afternoon sunlight pours into this room through the windows of the shop doors, Roberto grabs a socket wrench and begins to solve the puzzle of the moped’s engine. In this room, the radio is barely audible, and the space is not nearly as crowded as the main garage. For a mechanic’s shop, this area is somewhat peaceful.

But Roberto has vast experience with loud, fast-paced environments. On his wall hang several photographs of motorcycles and their riders. As a female rider, Manuela Bocchino stands out from the rest. Photos of her on the track and alongside Roberto in the pit area document her many races and their 2007 victory in an Italian competition known as Trofeo Esordienti Motocicliste. Roberto keeps the trophy he won that day on a top shelf in his office. Photos of Manuela, whose nickname is “Lillith,” can be found throughout the shop.

Other photos of local racers can be found along the hallway leading from the garage to the Moto Baleani showroom. One section of this wall of fame displays a list of the results from local youth races. In keeping with the traditional devotion to one’s hometown, Roberto has highlighted all of the racers who represent Cagli.

The showroom of Moto Baleani has an eclectic mix of two-wheeled vehicles. Mopeds, racing motorcycles, and dirt bikes crowd the floor. Like a seasoned champion displaying his trophies, Roberto keeps the biggest and best bikes in the most-visible area. Surrounded by a wide range of motorbikes, a candy-apple red MV Agusta with a hearty 675cc engine eclipses the other vehicles in both looks and strength. This bike epitomizes what Roberto loves about the vehicle and sport—“the speed.”

Although Roberto loves the high speeds reached during a motorcycle race, he also appreciates the finesse of trial races. These races require a much smaller and lighter dirt bike that can quickly navigate obstacles such as rocks and steep inclines. The bikes in these races do not have a seat because riders are not allowed to put their feet on the ground. They must constantly balance upright while navigating obstacles. Many local competitors of these trial races come to Moto Baleani to fix and tune up their bikes.

Sitting in his showroom office, Roberto admires the balance and technique of one of the greats in trial races, Spanish rider Toni Bou. On YouTube, Roberto watches in awe as Bou traverses giant boulders and almost-vertical inclines as fast as he can. Roberto has participated in trial races but on a much smaller level than Toni.

Roberto says he was introduced to the world of motorcycles by his father-in-law. In a quaint little shop on Via Flaminia, Roberto learned the skills and know-how of the motorized two-wheeled world. Now, Roberto has a much larger garage away from the commotion of old Cagli where he can teach his son, Andrea, his trade.

Motorcycles have become a family affair for the Baleani men—even their two German Shepherds join Roberto and Andrea at the shop. Max, one of Roberto’s dogs, has been blind since he was a pup after he accidentally ate poison. Although Max’s eyes have gone grey, he has learned to live without sight. Max can navigate the shop and also open doors for visitors. Much like Roberto, Max is strong but gentle and lets his actions speak for him instead of barking.

While he loves working with motorcycles, Roberto says he would have preferred the Italian country life. Given the option, Roberto says, he “would be a farmer in Cagli.” Despite his dream, Roberto shows no signs of trading in shop towels and motor oil for a plow and fertilizer. Instead of working the land as a farmer, Roberto continues to conquer the Italian terrain on two wheels.