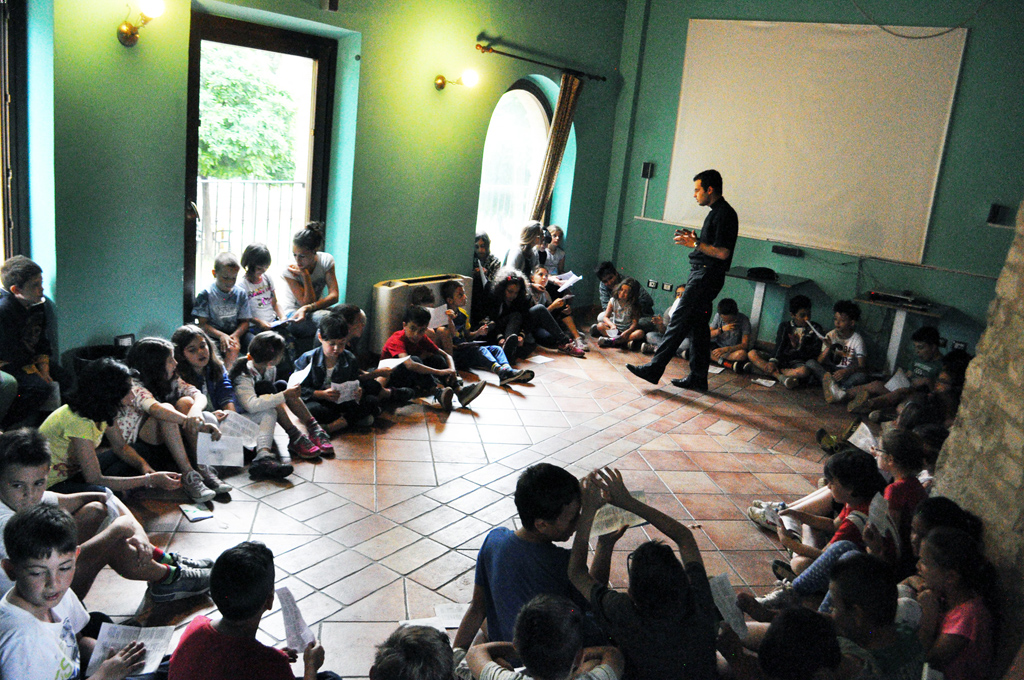 What You Sow, You Grow

Story and photos by Mirna Pleines

An earthy smell fills the air as nearly 70 young children traipse through the wet soil on their way to summer camp in Cagli, Italia. One by one, their faces light up when their eyes reach Father Diego, and he greets them each by name and gives them a hug. “Stefano! Chiana, Ciao!”

Father (The Italians say Don for Father) Diego Fascinetti, a Catholic priest, has brought his youthful energy for his faith to the small town of Cagli—a place with 14 churches, deeply rooted in Catholic history. Father Diego was assigned to the town immediately out of seminary.

Although he admits he misses his hometown of Fano, Italy, he has embraced the people of Cagli. As a child, he looked up to his priest and dreamed of one day being just like him. At the time, he thought his dream “wasn’t realistic,” he says, but as he grew, so did his calling to join the church.

Less than two years ago, Father Diego arrived in Cagli. He soon felt the call to spread the Catholic message to young Cagli residents who weren’t engaged in their faith, he says. He needed to change that.

“What you sow, you grow,” he says. “If we start teaching faith at a young age, faith will grow. It’s like a harvest.”

While Father Diego might not see the fruits of his labor right away, “the seed has been planted,” he says.

In an effort to begin his harvest, Father Diego turned his attention to cultivating faith among the young people of Cagli. The church owned a property rented by a bar owner that was already equipped as a recreational facility. It had a courtyard, a basketball court, a tennis court, a volleyball court, and a playground. He says he wondered why the space was not being used to “spread the message.” He decided to turn the property into a summer camp.

His project has been a triumphant success. When attendance reached 68 children between the ages of 6 and 11, Father Diego had to cap enrollment. “The camp can not grow any bigger,” he says, adding the camp can’t afford more children.

With the help of four teachers and four volunteers, Father Diego has structured camp to include learning by teaching and learning by doing. Each day, class is structured around a theme; activities reflect the theme. The afternoon is strictly recreational time. Kids play volleyball, chase one another on the playground, or enjoy a game of ping-pong. Every court is in use, and every child is participating.

In the morning before everyone arrives, the teachers engage the early, energetic children in activities such as coloring and singing songs. In moments of chaos, teachers exhibit calm. Once sessions begin, classes are separated into age groups.

During class time, children sit wherever they find space. Some classes are conducted in the kitchen while others take place in bigger rooms. Classrooms lack chairs, but the children do not seem to mind as they sit on the floor, reading, singing, and conversing with their teachers.

In the kitchen area, young bambinas are found sitting cross-legged. Each takes turns reading to the teacher. Upstairs, an older group of children sits in a circle, reciting the words spoken by their teacher. Other children color. The sounds of music travel from across the building as a young volunteer plays the guitar to an older group of children.

When Father Diego returns later in the day for his summer-camp class, activities cease, and everyone packs into the main camp room. Kids find space in every corner, sitting cross-legged, eagerly waiting for Father Diego to begin his class. Their admiration for him is difficult to miss. They listen attentively as he leads them in prayer, hymns, and Bible discussions. During hymn time, the children’s voices resemble those of singing angels, and Father Diego’s face gleams with pride. Every child is engaged, and every eye is on him.

In fact, admiration for Father Diego can be seen in every corner of the summer camp, including on the wall of the camp that includes a graffiti mural of him. The young priest is clearly adored.

The children sit in a circle while Father Diego walks around the room, pointing at each child and calling each one child by name—sowing his faith, seed by seed.