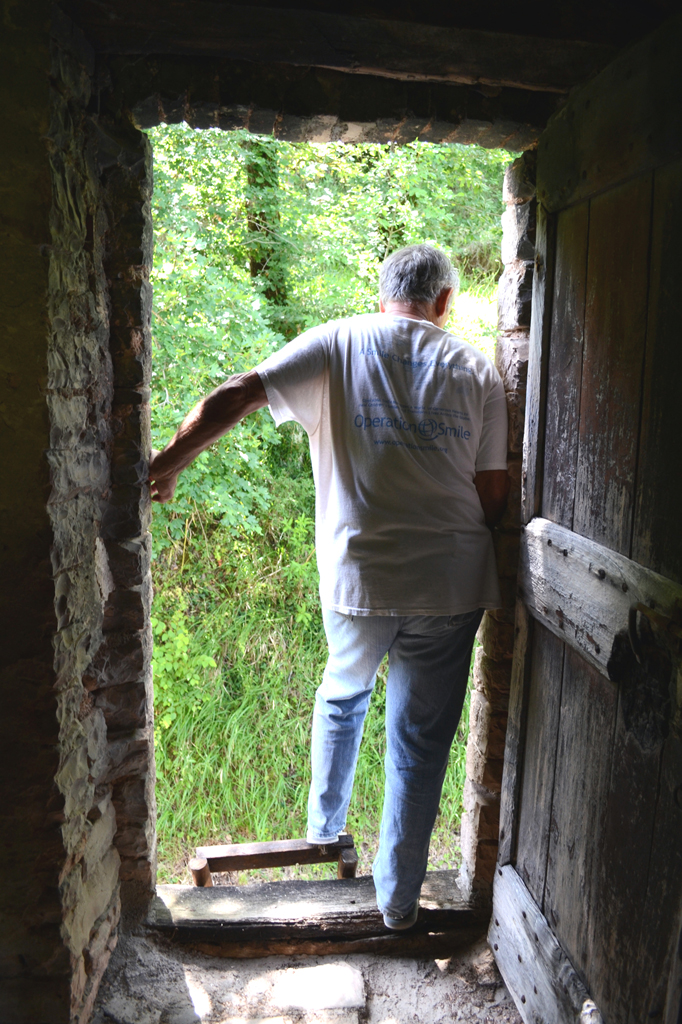 Story and photos by Kelli Pastore

A pair of strong rough hands gently caresses the sandstone . What appears to be a porous slab of stone will soon come to life through this artist’s masterful execution.

Unlike most residents of Cagli, Italy, Enzo Torcoletti isn’t a full-time resident. In 1962, at the age of 16, Enzo found himself in an unusual situation while he was attending art school in Fano. His father decided to leave Italy to find work in Sault Ste. Marie, Ontario, Canada. Faced with the choice of living alone in Italy, Enzo decided to join his father in Canada after he finished his schooling. Enzo’s move to Canada so many years ago was the first of his five relocations.

Once in Canada, Enzo decided he needed to learn English, so, in 1964, he enrolled at the University of Windsor as an English literature student. While pursuing his bachelor’s degree, a faculty member in the art department learned of Enzo’s art degree and asked him to become his assistant. This led to him earning another bachelor’s degree in sculpture and printmaking in 1969.

Fast forward several years to around the time Enzo graduated for the second time. An acquaintance in the art department at Florida State University offered Enzo a scholarship and position as a graduate assistant. After moving to Tallahassee, Florida, Enzo earned his master of fine arts degree in 1971. After accepting a position as a professor at Flagler College, Enzo moved to St. Augustine, Florida. Starting that same year, Enzo taught sculpture, art history, and drawing for the next 36 years, retiring in 2007.

After spending several summers in the sweltering Florida heat, Enzo decided to return to Italy on his summer breaks from teaching. Upon his return, Enzo lived in a relative’s home for several summers but decided to look for his own house after his relative decided to sell one home and move into the house where Enzo was living. Seeking peacefulness and tranquility, Enzo bought a house that dates back to the Napoleonic Era. The house sits at the end of a three-mile-long, winding, dirt driveway. Enzo says he loves the home because it is surrounded by beautiful scenery, has no television or phone, and is the perfect atmosphere for him to create. Wild sage and fresh apricot, walnut, and lemon trees surround the house.

“My only neighbors are the wolves and the occasional German tourist,” Enzo says.
For more than 45 years, Enzo has been actively involved in creating commissioned pieces, art exhibitions, and other sculptures. His work has been exhibited over the years in many locations throughout Italy and abroad. Some of his pieces are included in private and public collections around the globe. He work has also been featured in several different books including The Sculpture Reference Book: Contemporary Techniques, Terms, Tools, Materials And Sculpture and two other textbooks on sculpture by Arthur Williams.

These days, Enzo enjoys his retirement by creating in his backyard studio, which can be found at his home about 20 minutes east of Cagli. His focus has mostly been on creating visually intriguing stone carvings of a woman’s figure. Some of Enzo’s favorite materials include granite, sandstone, and marble. His love of stone carving has taken him to countries such as England, France, Portugal and Holland as he searches for the perfect carving stones. He also imports some of his materials from Egypt and the United States, but people in the Cagli area have given him many materials with which to work.

In addition to his Italian sculpting studio, Enzo also maintains a small studio in his St. Augustine, Florida, home. In addition to stone carvings, Enzo enjoys using wood, bronze, and other materials to create his works. Enzo’s creations differ from those of some artists because he has mastered the skills needed to create all his pieces himself. Some artists subcontract pieces of their sculptures to streamline the creative process. From conception to exhibition, Enzo’s works are completely his.

The master sculptor, Enzo Torcoletti may have spent the bulk of his life away from Cagli, but he will always be an artist and Cagliese at heart.