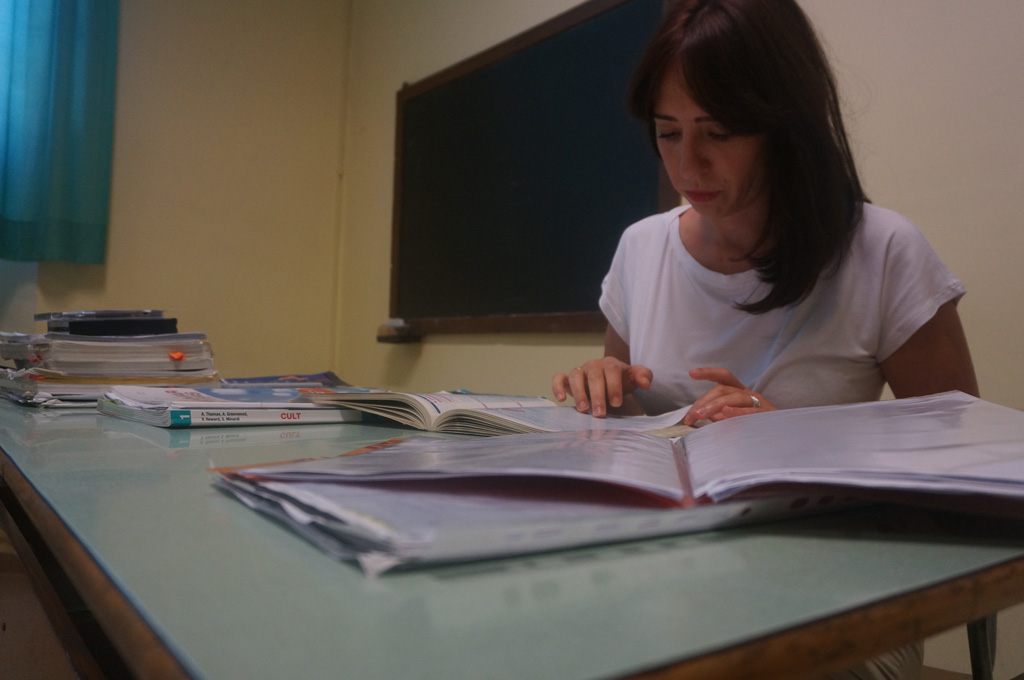 Story and photos by Kailee Dunn

The beige-colored room was quiet. The only sounds came from the teacher at the front of the room as she calmly reviewed the day’s lesson plan. When the time was right, she gracefully pushed her chair away from her desk, walked to the classroom door, and said cheerfully, “It’s 10:30.” In other words, it was time for English class.

For now, Cagli, Italy, native Giuditta Leoni is teaching in Pergola, just a few miles from her hometown. But this was not always the case. At the age of 18, Giuditta packed her bags for the University of Bologna. At the time, she could not foresee what her love for language could do for her or where her passion would take her. Since then, she has shared her linguistic talents in 12 countries and has lived in Spain, Australia, and the United States.

Although Italy is her favorite place to be, she admits that venturing beyond her home country was not difficult. “When you love what you do, it makes leaving easy,” she said. Now, she believes all of her students should travel and explore the world.

So, how did a young woman travel the world while still going to school? She did a variety of jobs, including working as a gardener and a waitress. As a member of the USA Pavilion-Expo team in Milan, she met U.S. Secretary of State John Kerry and the First Lady of the United States, Michelle Obama.

Giuditta began learning English when she was 14-years-old, but she hadn’t thought about a full-time teaching job until she worked as a translator and Italian teacher. In addition to English and Italian, she also speaks Spanish and French.

She was able to practice the Spanish language while completing her bachelor’s degree in Madrid. After a couple of years, she decided to pursue a master’s degree in teaching Italian as a foreign language. “Language is something that makes you free,” she said. “It allows you to express yourself, wherever you go.”

Giuditta now works as an interpreter, a private tutor, and a language teacher, working in a new city or country every few weeks. On this day, she is in Pergola, giving three teenage boys their last English lesson of the summer. As the boys shuffled in together, one said “buongiorno,” and they all took their seats. In English, Giuditta replied “good morning,” and the class began.

On the agenda for the day was first, second, and third conditional grammar. Like a proud mother, she patiently waited while one of the boys read aloud or answered a question in English. When the time came to complete the class, the three boys and Giuditta reviewed the lesson. “Very good,” she said smiling, and the boys were dismissed.

Prior to the class, Giuditta explained the importance of continuing to learn and grow. Education, as she explained, is where passion and understanding begin. “Education is the base for everything,” she said.

In July of 2017, Giuditta will travel to England to serve as a course leader for a program known as Education First. While the program is only three weeks, she plans to continue working with young adults and children to enhance their language skills and sense of culture.

“Language and culture go together,” she said. “There is no language without culture. There is no culture without language.”