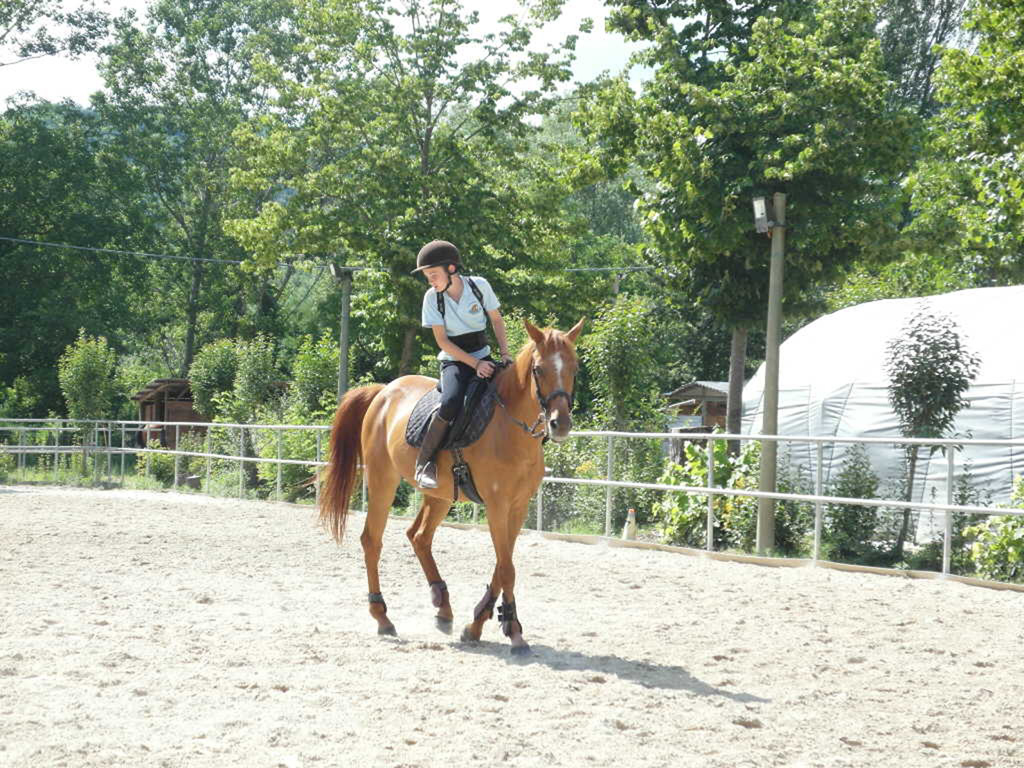 Giovanni Celli: Not Just Horsin’ Around

Story and photos by Yolanda Chang


The high clouds drift across a clear blue sky, and a young boy rides his horse at “MiNiMo,” a horse-racing school in new Cagli. He looks confident and happy. He is Giovanni Celli, a 12-year-old boy who loves horses.

Giovanni was not always a fan of animals, he says. For the first eight years of Giovanni’s life, he was deathly afraid of all animals; horses were no exception. One day, to overcome his fears, he decided to watch a horse-racing competition. The moment he saw the horses running, he was attracted to their strength, speed, and agility. Giovanni decided to begin his career in horse racing.

Giovanni’s decision was big news for his family, he says. The decision so surprised his mother that she found it hard to accept. “I almost had a heart attack,” Giovanni’s mom says. “He had so much fear of animals. But now he suddenly told me he wanted to be a jockey. How could I accept it?” By his ninth birthday, she had come around—demonstrated by her handmade gift to him of horse-racing attire.

“I was so shocked and happy on my birthday—the best gift ever,” Giovanni says and smiles at his mother. At that moment, his horse-racing journey officially began.

In 2013, Giovanni started riding Camilla, a beautiful brown horse who was gentle and friendly to kids. Because of Camilla’s good nature, she was perfect for Giovanni, who also worked with a professional trainer at MiNiMo. Giovanni recalls the first day he met Camilla. “When I saw her, I felt like she was telling me not to me afraid,” he says.

After a couple of months of training, Giovanni turned 10 years old. This was a significant year for him because that year he attended his first horse-racing competition.

At the competition, Giovanni had to show his coordination and his connection to Camilla. Therefore, Giovanni had to ride his horse alongside another rider, matching her speed and the rhythm of the music. Without any doubt, Giovanni gave his best performance. He was officially a jockey, he says.

At age 11, Giovanni won a competition in which each jockey performs different specialties. In the competition, Giovanni demonstrated how horses work a farm. Giovanni says that one of the reasons he loves horses so much is because they build strong friendships with human beings. “Horses don’t talk back,” he says with a shy smile. “Camilla is not only my best friend and partner but also a crucial mentor to my career.”

Now that Giovanni is 12 years old, he is no longer a beginner. For now, he has his own horse, Letizia. When he takes Letizia out from the barn, his eyes fill with pride. He knows Letizia signifies a new level of his career. Letizia is like Camilla—majestic, strong, and loyal. The way she walks demonstrates her power and her confidence. She seems proud of Giovanni as well.

Letizia belongs to the owner of MiNiMo horse racing school. In October 2015, she told Giovanni and his family that she would like to give them Letizia for a year so that Giovanni could continue his advanced training. The family would be responsible for medicine, food, and general care. Giovanni and his happy were thrilled because they could not afford a new horse, which could cost anywhere from $300 to $1 million. Giovanni and his family cheerfully and thankfully accepted Letizia. The offer brought Giovanni not only a new horse but also new hope for his future.

Unfortunately, the following October, MiNiMo’s owner asked Giovanni to give Letizia back because Giovanni needs a more-advanced horse to reach the next level of his training.

“It is sad that I have to say goodbye to Letizia soon,” Giovnni says. “But I have to keep going. And I know Letizia understands. She knows me.

“The important thing is she will forever be my friend like Camilla,” he says, looking at Letizia and gently stroking her hair. “The connection between me and them is unbreakable.”