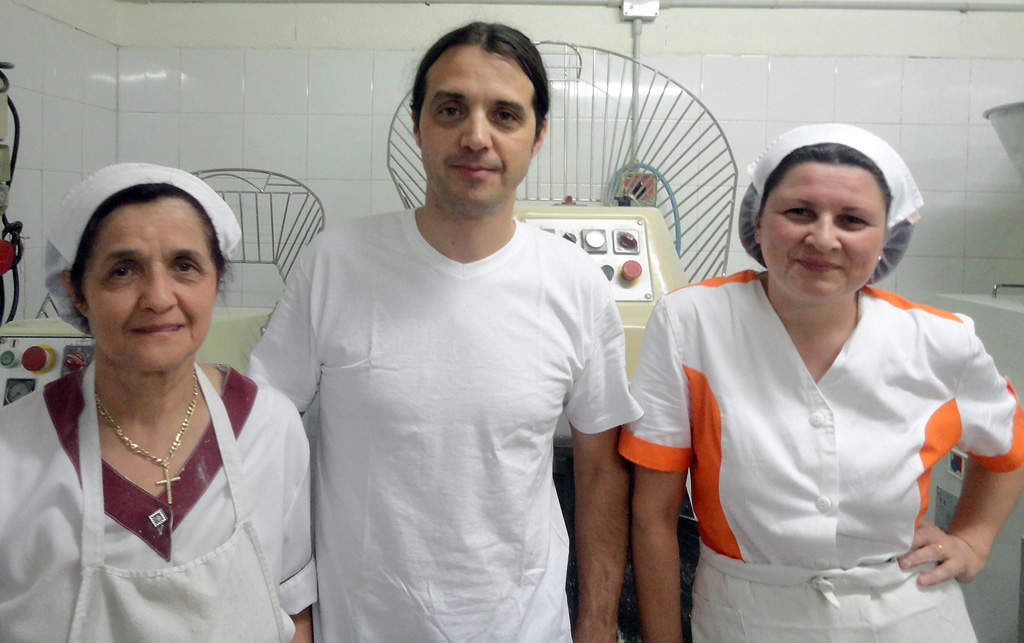 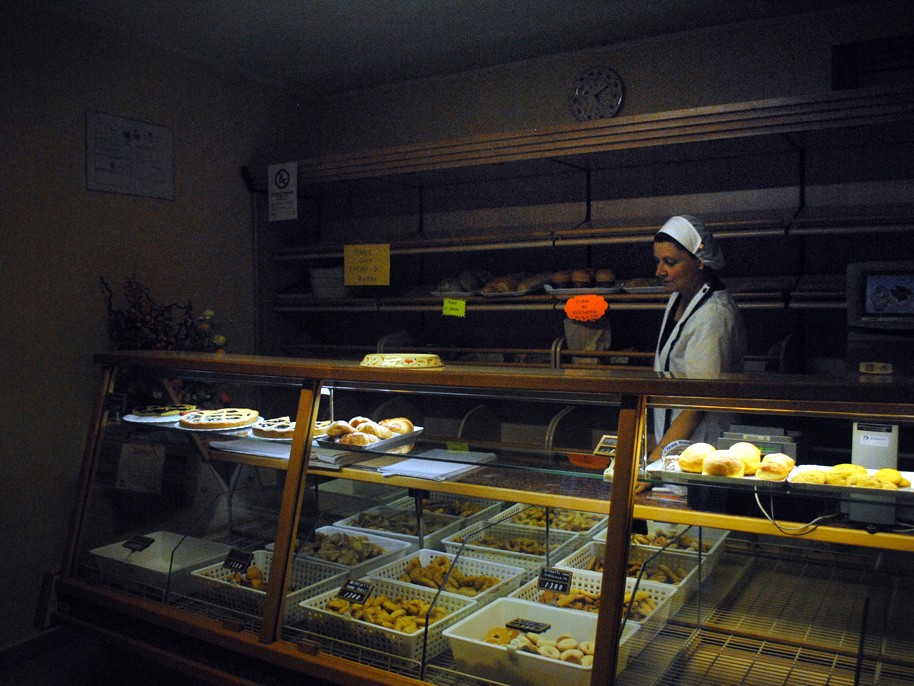 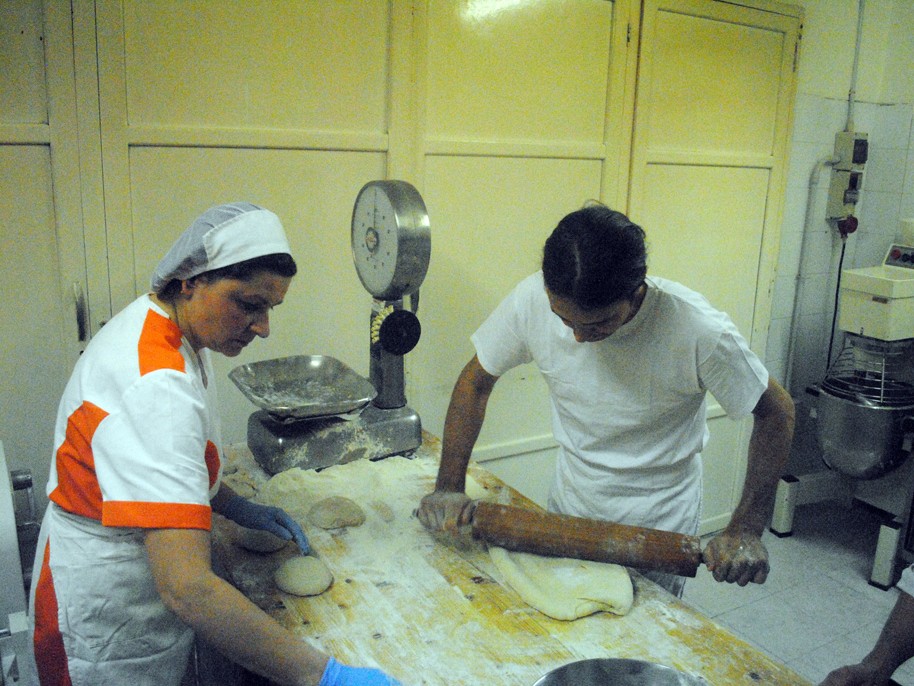 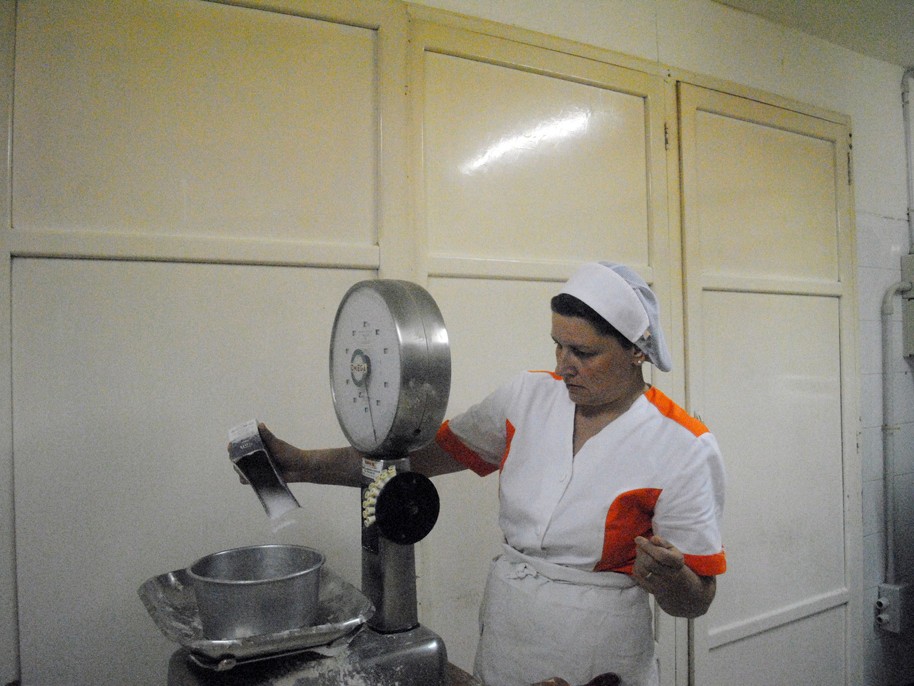 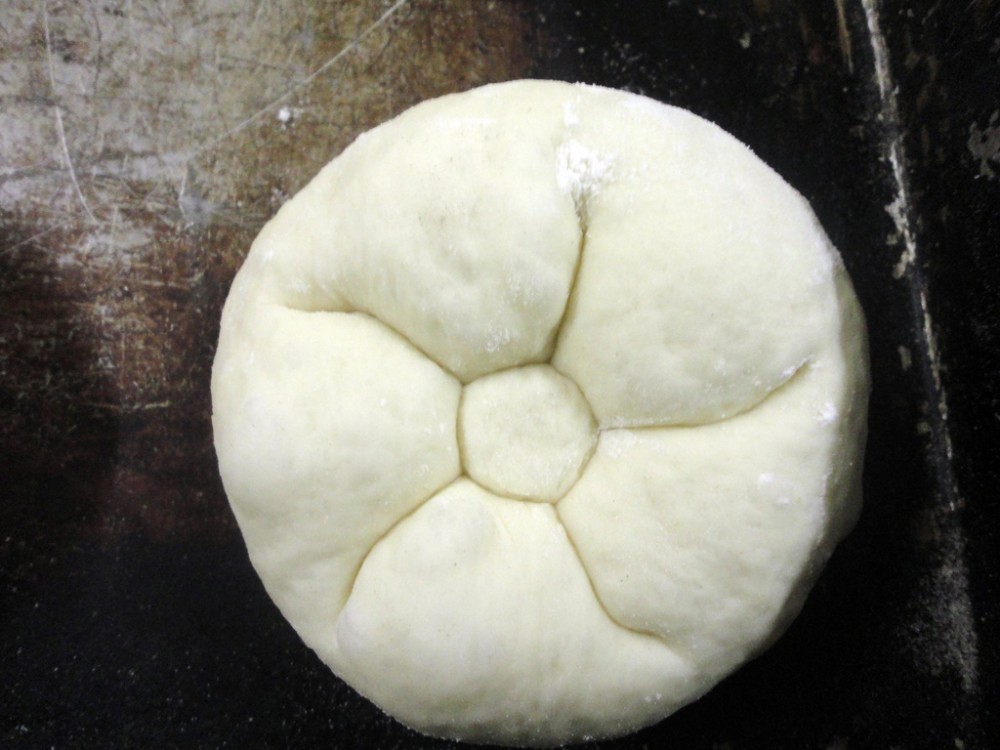 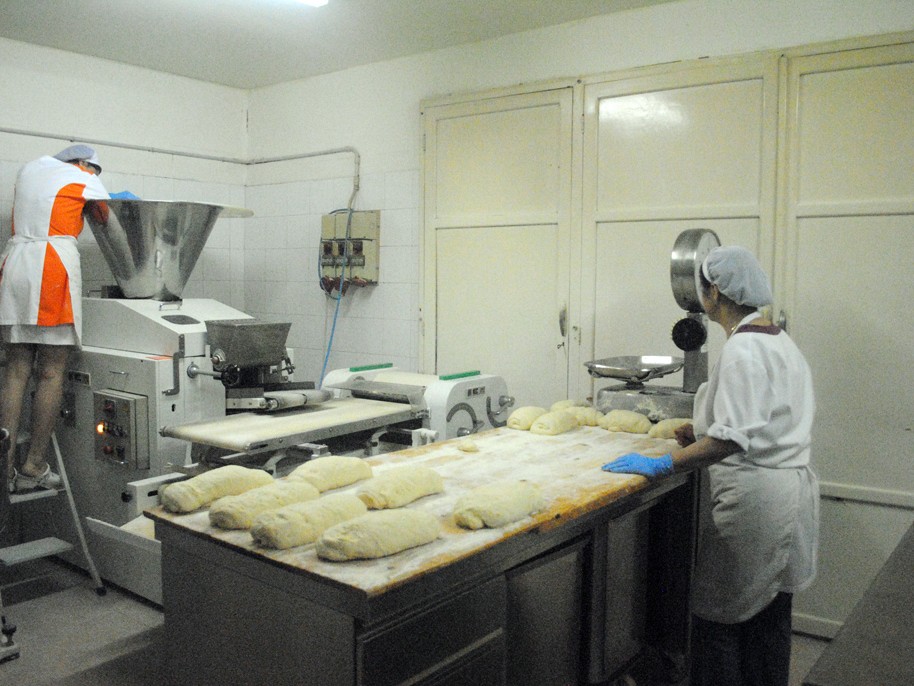 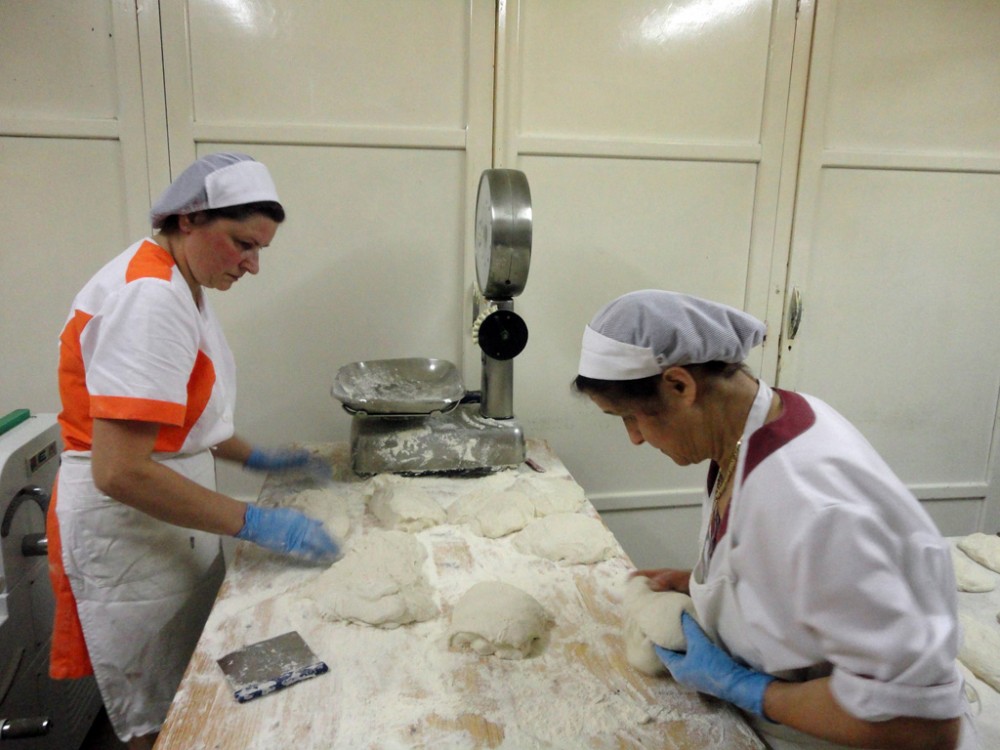 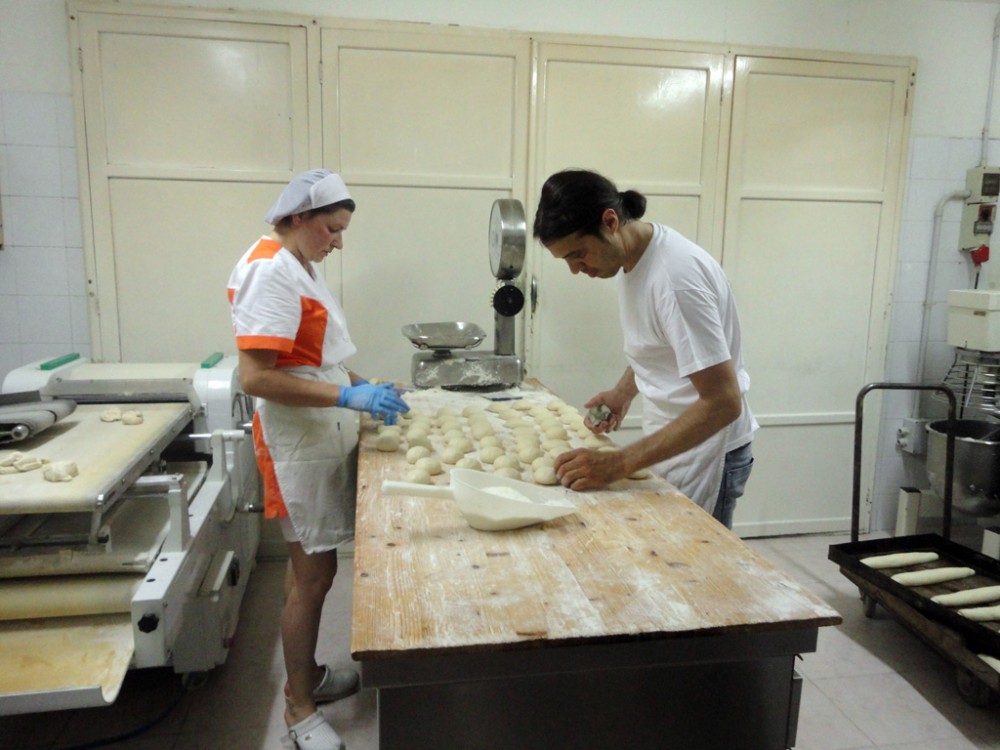 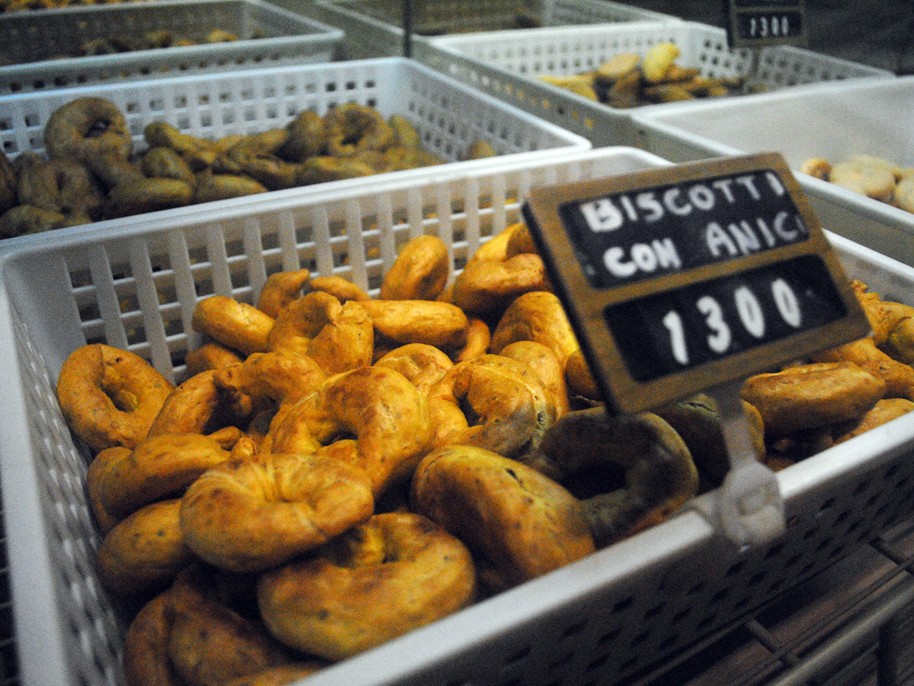 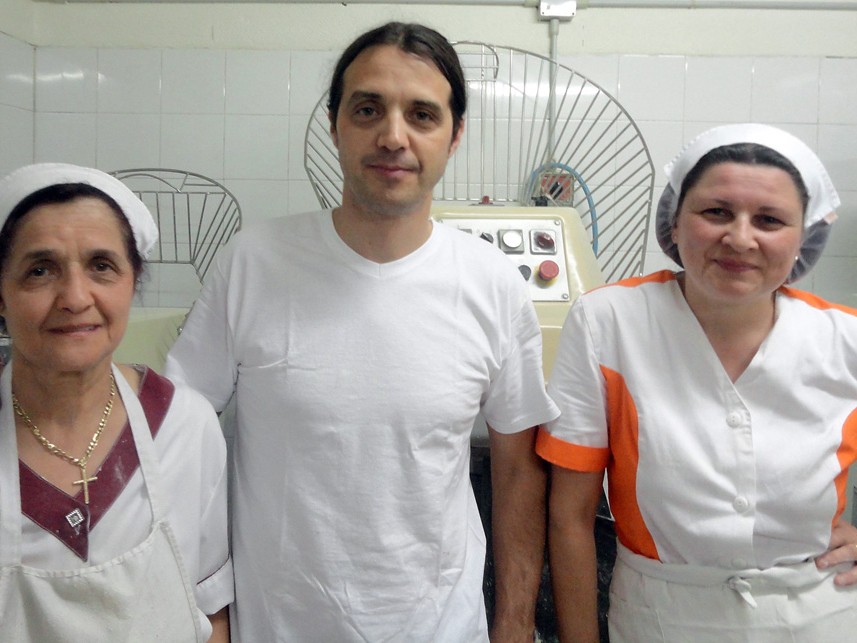 While the Cagliesi sleep after the hustle of life in the medieval city, Barbara and Roberto Ricci work in their bakery, Panificio Ricci. It’s 1 a.m. and Barbara and Roberto are dressed in white uniforms. Flour covers countertops and the kitchen is full of noise. The smell of freshly baked tortes and croissants rises over the neighborhood surrounding Via Benamati.

Owning any small business is a challenge, but these days, owning a bakery might seem archaic, given the late night working hours and changing economic climate.

These difficulties don’t bother the owners of Panificio Ricci. They have perfected the art of balancing the baking needs of croissants, tortes, rolls, and traditional Italian bread. “The breads are difficult to make because all the breads rise at different times,” says Barbara, glancing quickly at the clock every ten minutes to stay on schedule. “Each bread has to be perfect,” Barbara explains, “so you have to watch it rise while working on the other pastries.”

Time is of the essence when supplying bread to markets in Acqualagna, Frontone, and Cagli.  By 3 a.m., Roberto is off in a small white van transporting brown rolls, apricot tortes, and chocolate-filled croissants to the surrounding markets.

When customers walk into Panificio Ricci at 6 a.m. for their breakfast pastries, they might not be aware that Roberto and Barbara have been baking for five hours.

The bakery is known for its craft. “Panificio Ricci breads are traditional,” Leo Martinelli, a loyal customer lounging outside Caffe’ d’Italia insists. “They use traditional methods and a fire oven, which makes their breads better.”

Back in the bakery, the phone rings and Barbara immediately answers it. After a short conversation, she assembles the newest order of rolls. She explains that the biggest competition for Panificio Ricci is the rise of supermarkets, where people are now able to buy frozen bread to bake at home.

Barbara and Roberto stay upbeat about the changing conditions. They gain support through a network of other Italian bakery owners. Together, bakery owners attend seminars, encouraging each other and learning new techniques. “Owning a bakery is not too difficult because of the team support that the seminars give us, ”explains Barbra as she adds trays of rich biscotti and rolls to the glass display in the storefront. The network of bakery owners gives hope to the owners of Panificio Ricci because it helps preserve the art of bread making in an increasingly fast-paced world.

In addition to operating the bakery, Roberto and Barbara give back to the community through monetary donations that support research for genetic diseases. Their involvement in the community expands beyond the bakery doors, building a loyal customer base.

Barbara answers the phone for a second time in fifteen minutes, showing how busy the bakery is. After taking more orders, Barbara discusses how Italian taxes impact the business. Taxes in Italy are progressive and based on income. Taxes on businesses are high, threatening their livelihood. The bitterness is evident in Barbara’s voice as she explains the issues with Italian bureaucracy and the penalties if a form is filed incorrectly. “Because the taxes are so high, it is impossible to hire help,” Barbara explains after assisting a customer. “Dealing with the government kills us.”

The noon sun rises higher in the sky, signaling the day’s end for Barbara and Roberto. They don’t know what the future may hold. They want to continue making and selling bread, but with the economic conditions in Italy, change cannot be considered casually.

One thing that doesn’t change, though, is the bread making cycle. “Everyday is the same,” Barbara says. “Start at one and end at one. But we like it.”