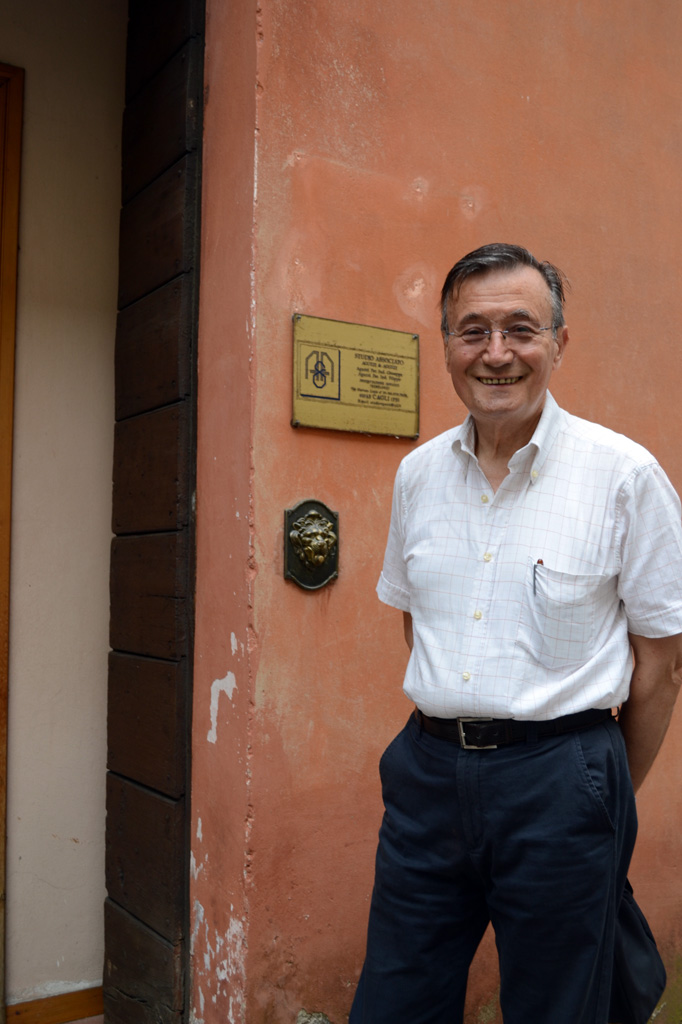 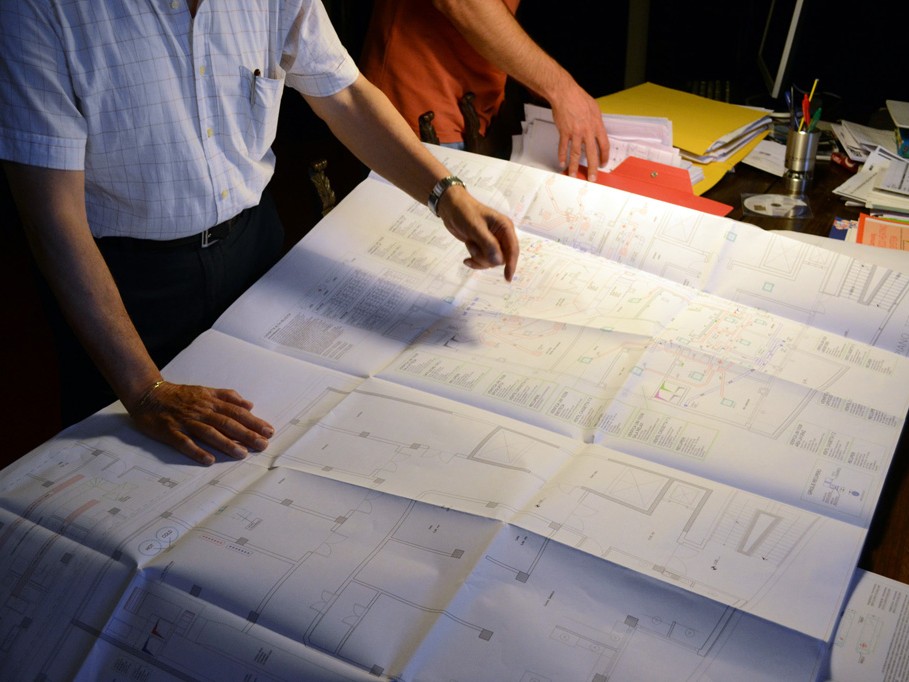 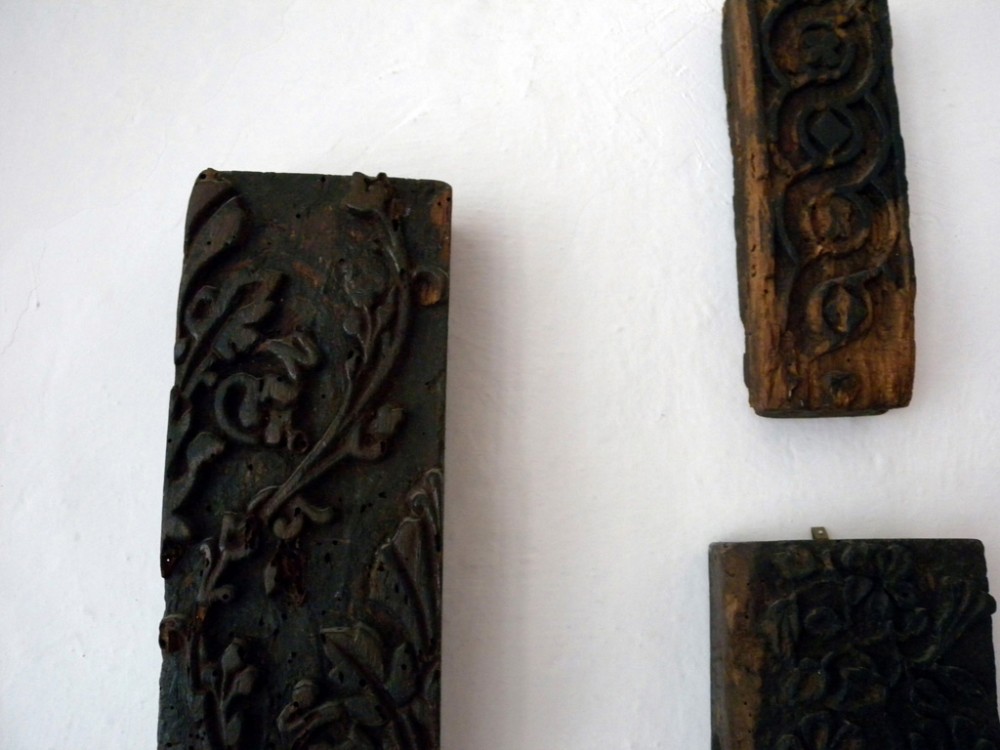 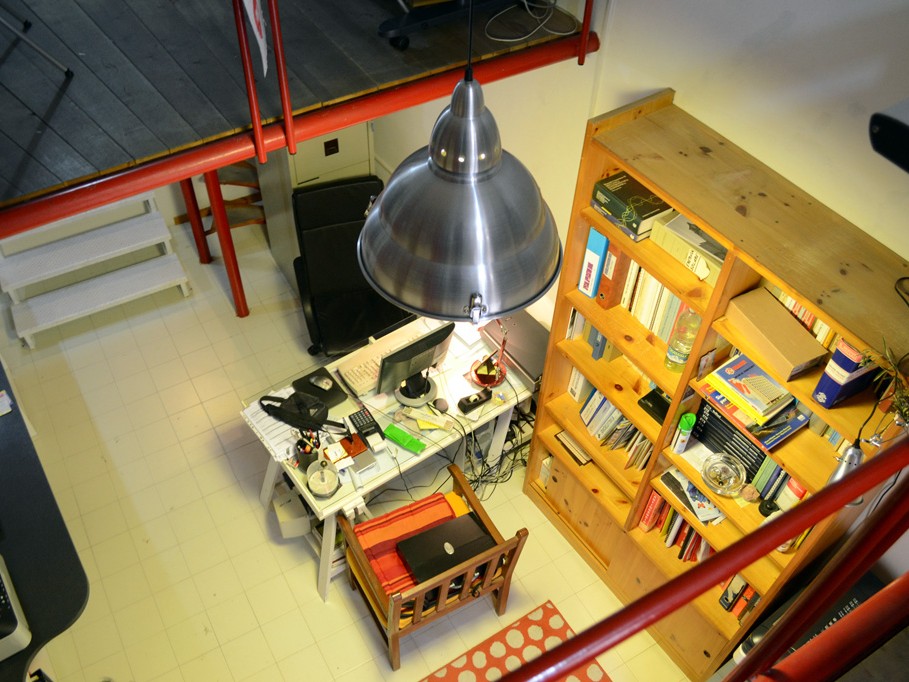 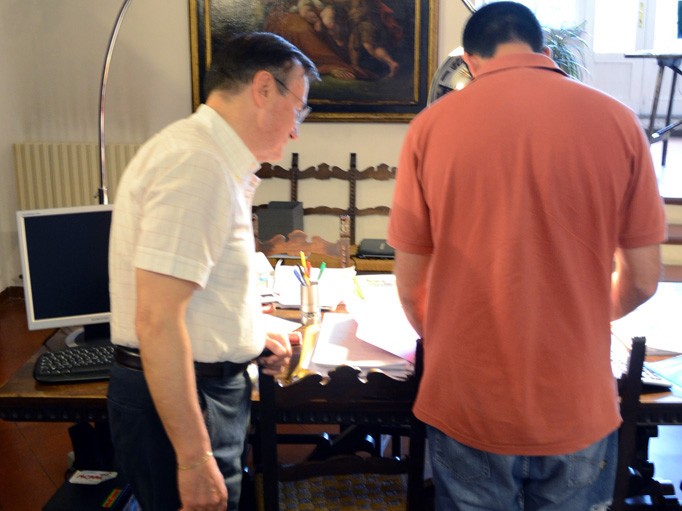 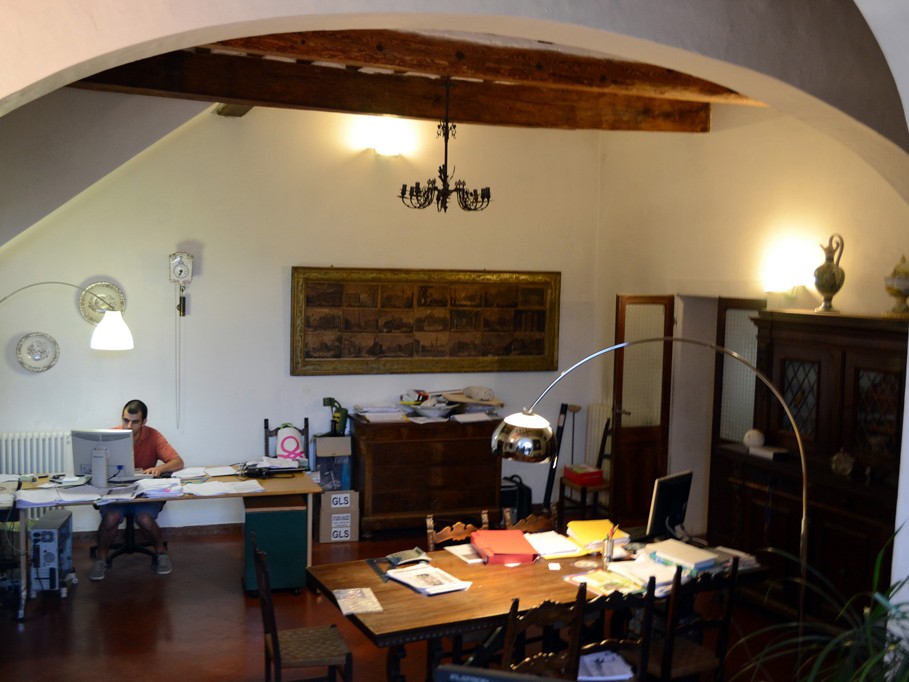 In a garden sandwiched between two churches, a distinguished gentleman rolls a velvety leaf of sage between his forefinger and thumb.  He picks another plant, this time a long, spidery branch of fennel.  Its sweet anise scent fills the air.  Giuseppe Aguzzi points out the different plants, and the neighboring church steeple, before returning to his office and family home in Cagli, a small town in Italy.  Giuseppe has the relaxed deportment of a man on the eve of his retirement.  As he moves into this next phase of life, he will have more time to smell the herbs and admire the view.

Giuseppe Aguzzi will soon pass his successful engineering business to his capable son, Filippo.  Giuseppe’s office is on the ground floor of a historic building, attached to the garden by large glass doors and a sunny patio.  Inside the office, three wooden desks and metal lamps are carefully arranged under a high, arched, wood beam-laced ceiling.  Along a wall with a 16th century fireplace rests a pile of blue, yellow, red and green building blocks.  These children’s toys are a recent addition, along with the arrival of Giuseppe’s grandchildren.

Giuseppe moves between his Renaissance art-filled office and an adjoining, modern loft workshop.  A narrow, spiral staircase in the corner leads up from the stone floor to an open mezzanine level above.  Fire engine red metal pipes circle and support the low-ceilinged mezzanine, upon which rest drafting tables and bookshelves lined with technical manuals and equipment.

Giuseppe meticulously unfolds papers like an accordion and spreads them across a large, wooden table. These blueprints are one of the final projects of his professional career and contain the schematics for a complex cooling and refrigeration system for a hospital in the nearby town, Pesaro.  He points to detailed diagrams of ducts, valves and intake pipes, and explains how each smaller piece functions within the whole design.

The building Giuseppe uses for his office and family home has an 800-year history as a creative workspace and living space.  Giuseppe’s daughter, who is an archeologist, identified Roman ruins in the basement of the building.  The Aguzzi family has a tradition of hands-on learning that is passed down to each generation.  As a young man, Giuseppe accompanied his father to worksites, and similarly, his son Filippo spent all of his school vacations working alongside Giuseppe. The tradition continues for the youngest generation.  Giuseppe’s 8-year-old grandson regularly accompanies his father, Filippo.

Giuseppe points to wooden blocks the size of dinner plates hanging on the wall near the garden.  Between them is a framed, antique, parchment document.  Giuseppe explains that eight generations ago, in the early 1800’s, the Marche region belonged to the Papal States.  His ancestors used this same work area to produce textiles for the Pope, and the 300-year-old wood blocks were used to make papal draperies.  Giuseppe displays them, along with the official document describing their commissioning, in his office as a reminder of the family’s past.

Describing his professional achievements, Giuseppe explains that he welcomed both the technical challenges and the creativity required to discover new methods within his industry.  He says he always preferred clients to utilize his services based on his reputation for quality and forward-thinking craftsmanship, rather than price.  His commitment to progressive thinking is not limited to the thermodynamic and aerodynamic techniques within the engineering field.  As he demonstrates his appreciation for the past by displaying the achievements and artwork of his ancestors, his face fills with a look of concern as he mentions the importance of conservation for future generations.  He proudly states that throughout his career he sought ways to avoid contributing to industrial pollution, especially carbon emissions.  He stresses the importance of preserving the environment for people and animals alike.

The successful industrial projects, and his forward-thinking mindset, validate the functionality of Giuseppe’s office and workspace, and ensure his professional legacy. At the same time, the Renaissance paintings and historical wood blocks represent the importance of beauty and history.  Giuseppe sums up the atmosphere when he says his surroundings combine “the flight of the artist with the precision of the engineer”.