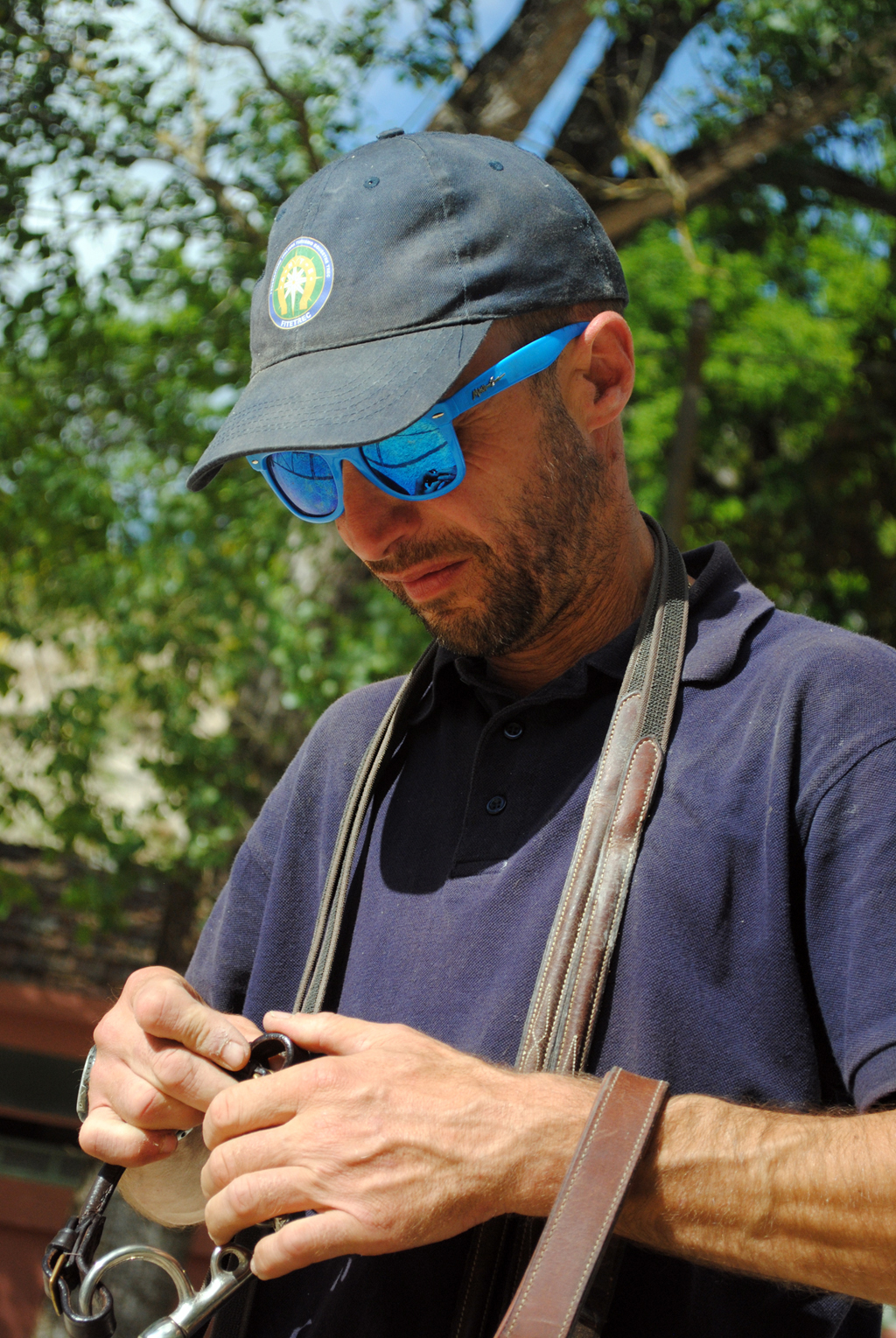 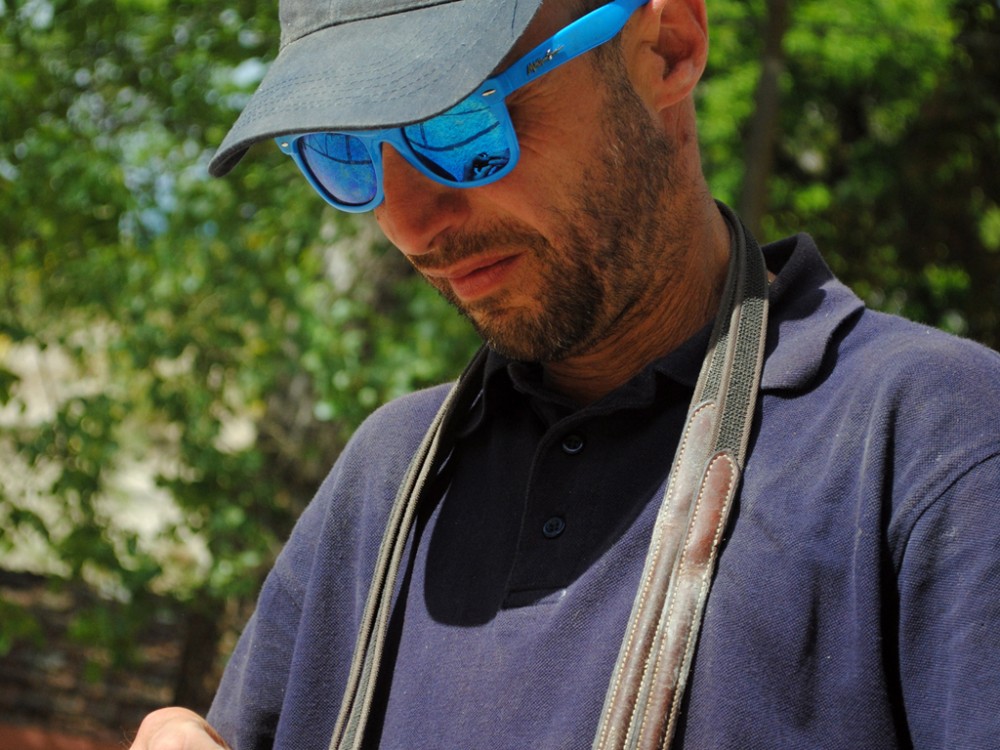 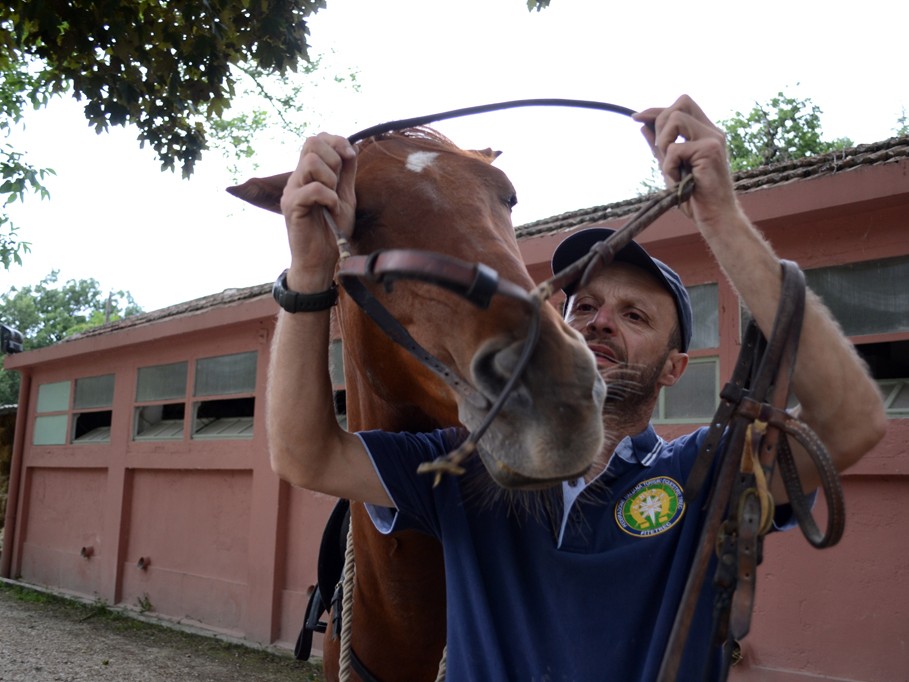 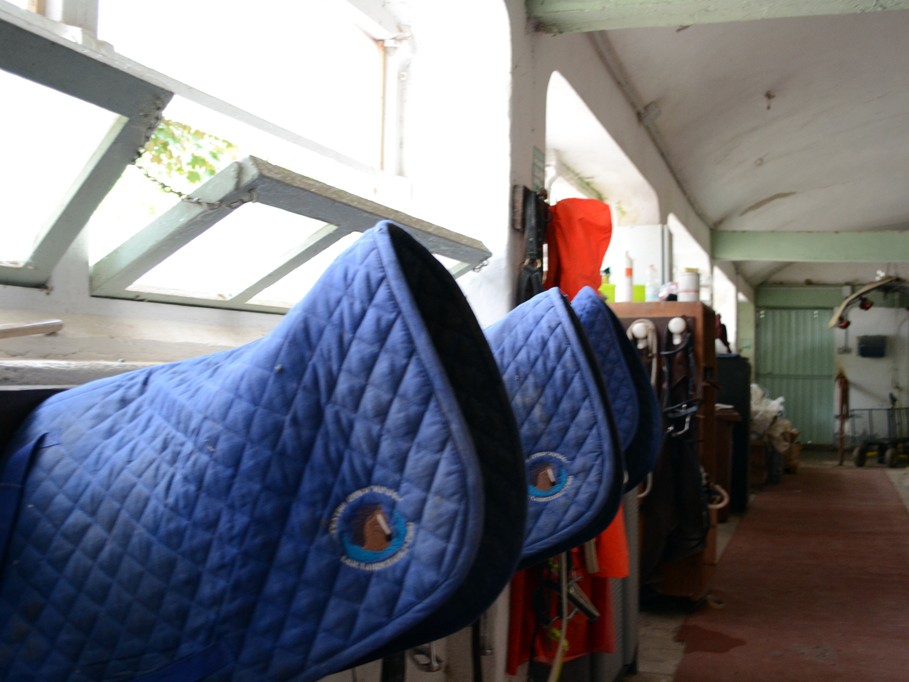 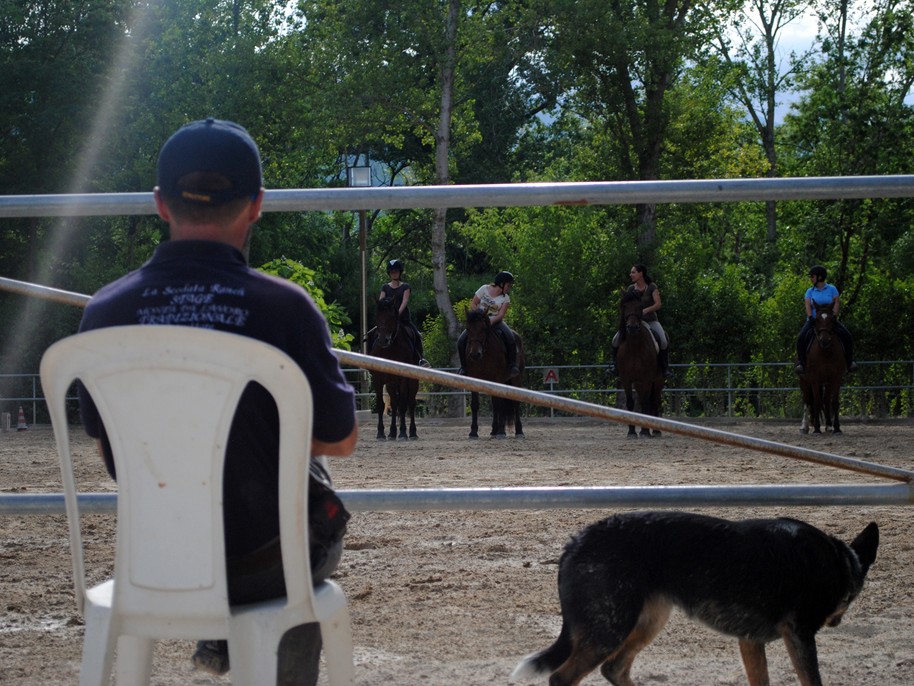 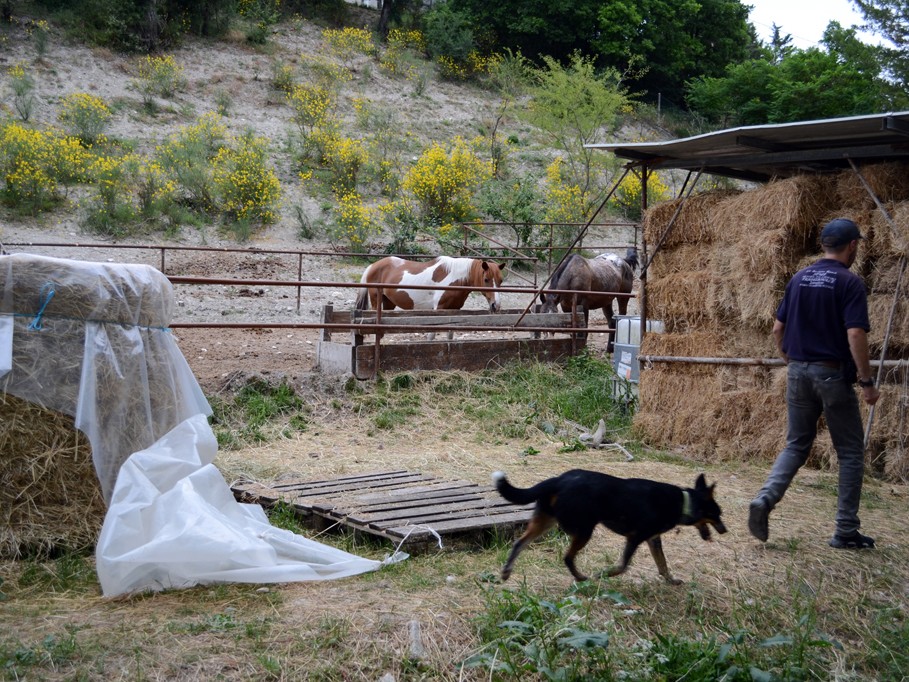 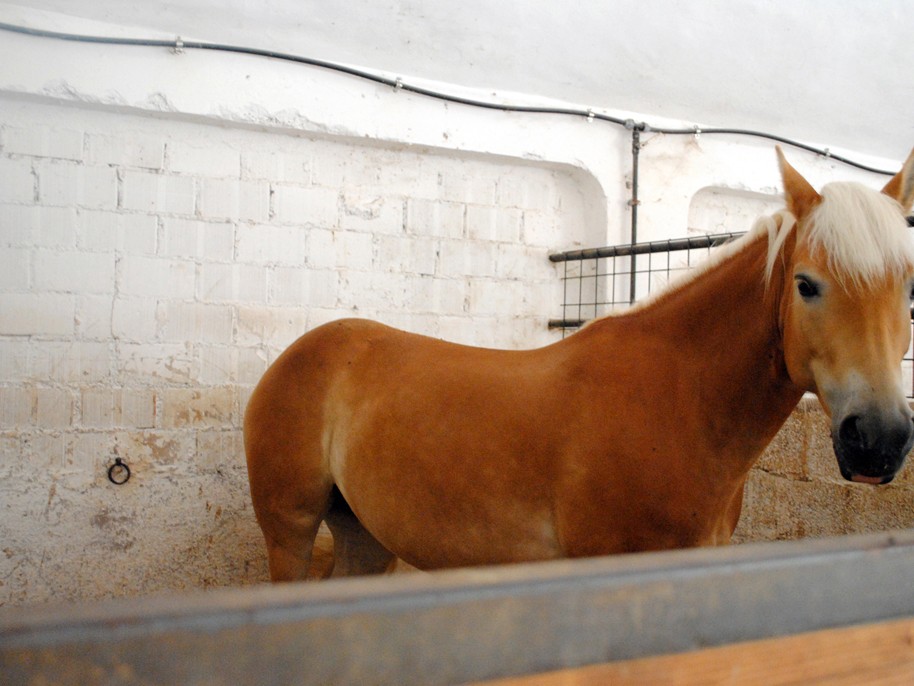 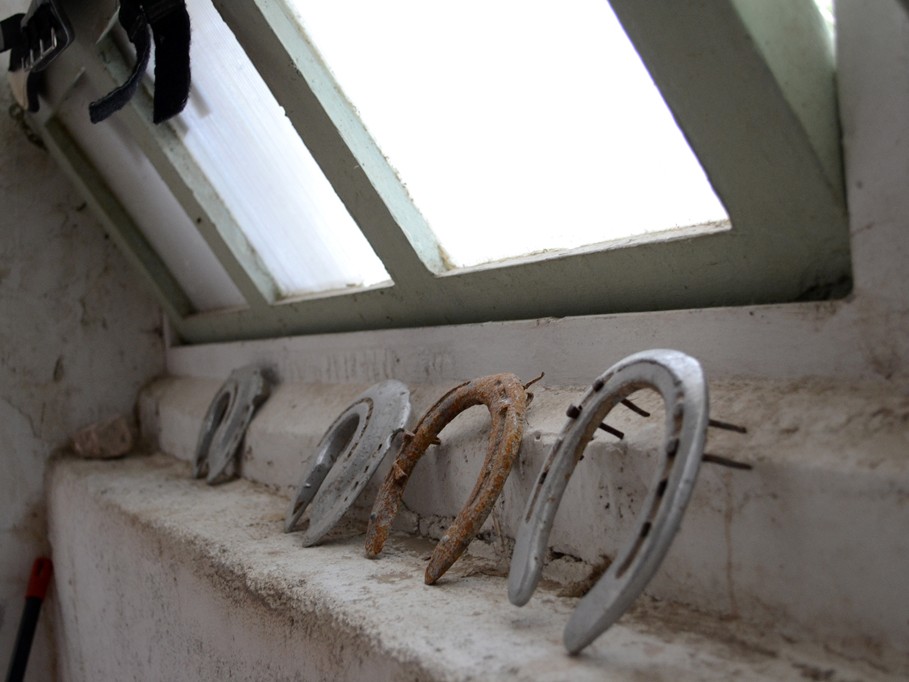 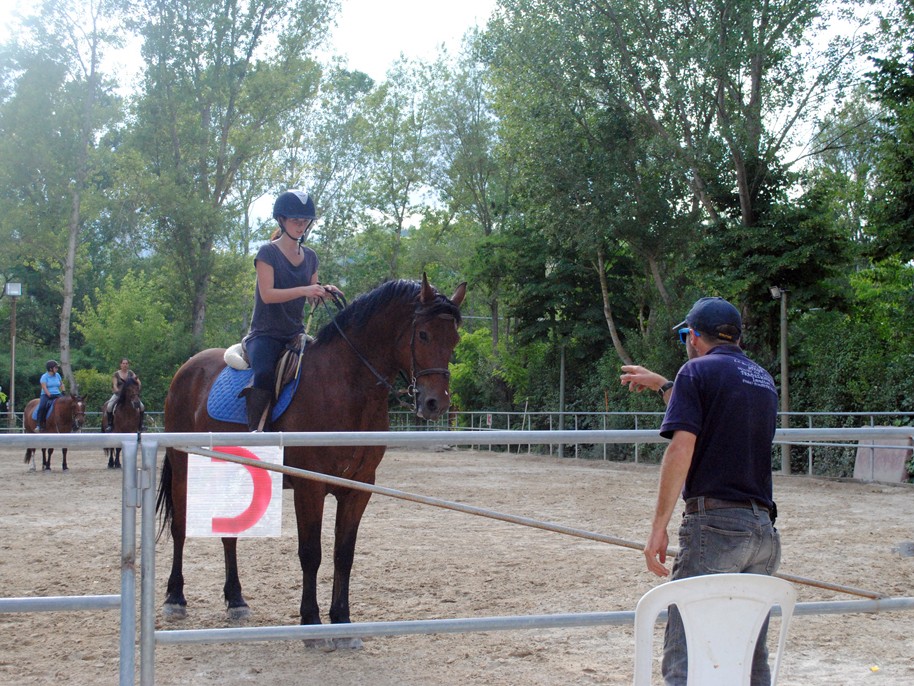 A man comes out of a shed and passes golden, fizzy liquid in glass bottles to half a dozen men and women sitting around a worn-out cedar table. Lively conversation and the sweet smell of hay fill the air. Young equestrian students wander between the table where their parents sit, and the stables where they return to their quotidian duties. Tall, strong horses are walked deliberately from the stables and tied to a thick wooden beam. Coats of fur glisten and the animals whinny softly as black leather bridles are fixed in place. Waiting tolerantly, the horses stand respectfully, anticipating their next activity. Luca Panunzi is a tall man with black riding boots. He doesn’t linger for long near the shady table, but instead returns to the scorching heat of the summer sun. Lethargic horses and riders trudge on through their daily routine.

People who know Luca know about his special gift of working with horses; some even refer to him as the ‘Horse Pope’. Luca spends much of his time training horses. Luca explains that he is careful not to impose his will on the horses he trains, but to work patiently to develop a routine. Horses appreciate routine. While training the horses, one must be careful to not pull too much or the horses will think they are doing wrong and overcorrect themselves. The art of training horses requires an abundance of patience for both parties.

On weekdays, Luca manages a mail route from 7:30 a.m. to 3:00 p.m. However, at any other time he is found at the ‘Centro Ippico: MiNiMo’ along with over twenty horses of various breeds, including American Quarter Horses and Thoroughbreds. It costs roughly 110€ per year to keep up with the Federazione Italiana Turismo Equestre e Trec (FITETREC), but Luca considers this accreditation a worthy investment.

The beautiful horses at Luca’s consume over 10 kilos (20 lbs.) of hay per day and must be kept on an orderly feeding schedule. Keeping things running on time and on task requires the discipline of a carefully thought out operation. It helps that the blacksmith, students, and stable alliances all pitch in and run this hub of life and excitement.

Music plays from a car radio in the parking lot by the horse stables where Luca, shadowed by his faithful dog Daisy, pulls up a plastic chair. Four women mounted on horses assemble in a perfect horizontal line in the center of the arena. The acoustic pop music cues them to begin. In harmonized steps, the horses follow their riders’ directions. These equestrians are practicing for an upcoming synchronized horse riding competition. Luca looks intently to the riders, among them his companion, Francesca Catena, who rides with the students. “You don’t play to play, you play to win,” Luca says, as he encourages the riders he coaches.

After graduating from the Technical Institute with a certificate in accounting, Luca quickly realized that being confined to an office environment was not for him. Though his aunt serves in a prominent position at Poste Italiane, the Italian postal service, and convinced Luca to also serve in the field, Luca’s real passion is to work with horses. Luca’s father had a passion for horses that inspired Luca towards his adopted family. In 1982 Luca began his routine of mailman, equestrian, horse trainer, and coach. In March 2014, Luca participated in a special competition in the Fiera di Roma where he took home second place.  His life is swarming with family, friends, students, and horses.

The small, dark wood-stained shelter offers shade from the scorching summer sunrays. The florescent lights from the ceiling and display cooler filled with beer and soda hum slightly. All four walls are lined with photos of special moments of horses and riders; many photos are of Luca on horseback. Engraved medallions hang on nails around the shack and over a dozen trophies are stacked atop the cooler in the corner of the room. Luca grabs a quick drink of cold water before going back to work.

Three other instructors often come to the stables and assist Luca in coaching students of all ages and levels. Luca focuses on training for specialized competitions of the higher-level riders. His students are full of praise and admiration for their instructor. Student Alecia describes Luca as “the best instructor in the world,” then whispers, “and I’m not saying that because he is sitting right here. I say that because it’s true. His teaching is fair.” Alecia is not the only one who thinks this way. While Luca does encourage an atmosphere of competition, he also reminds the students, “If you don’t want to win, at least do your best”.