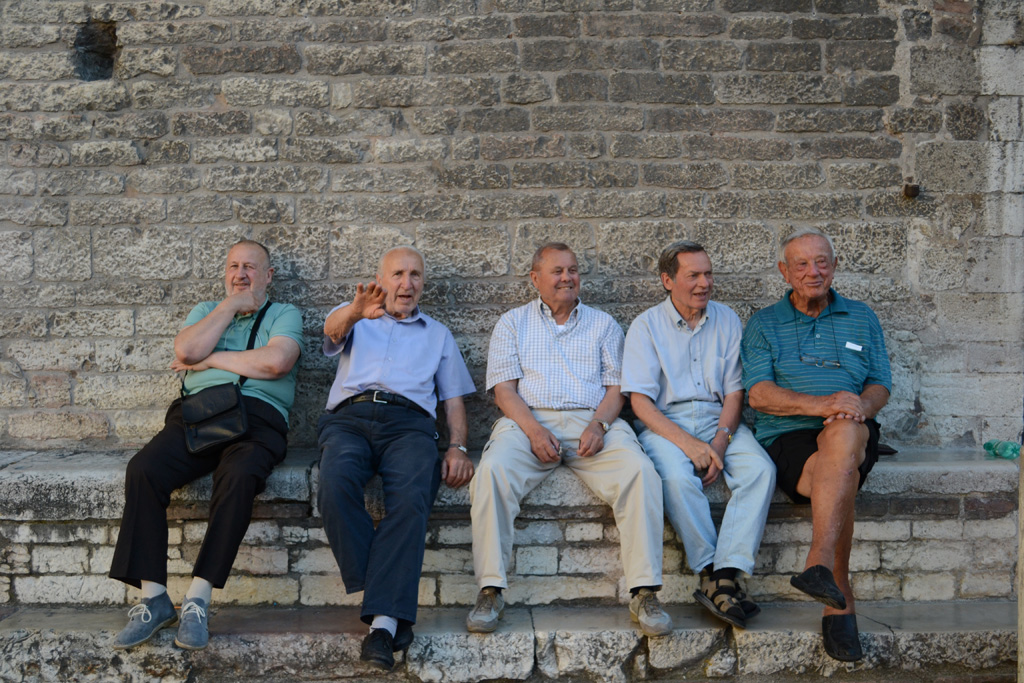 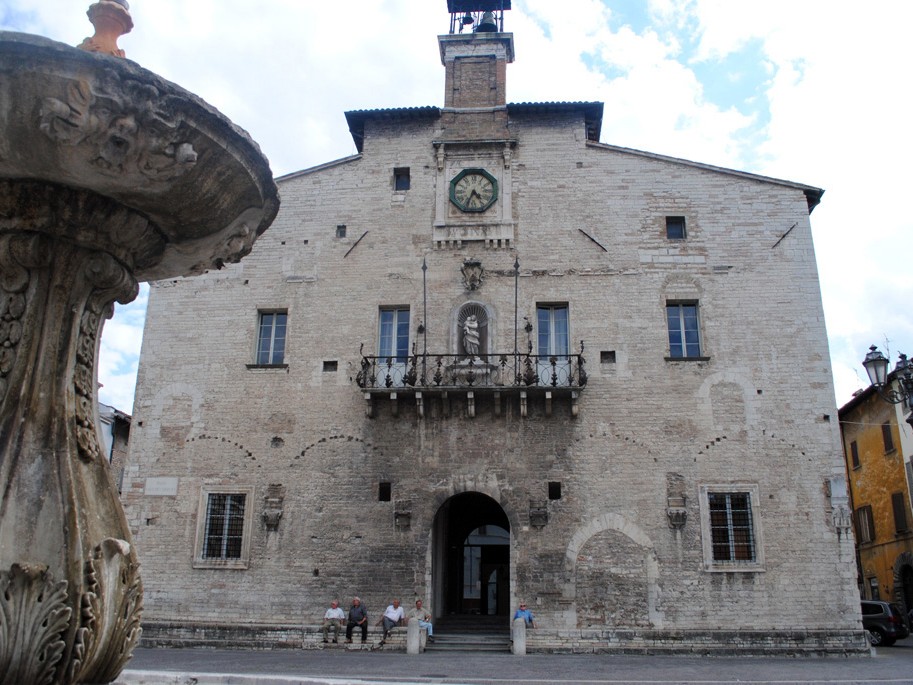 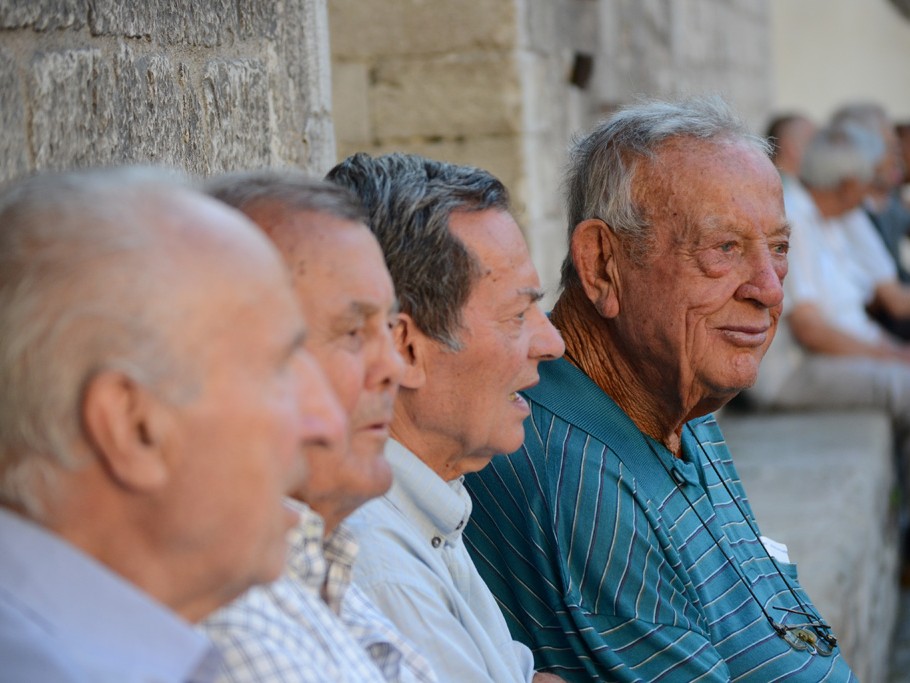 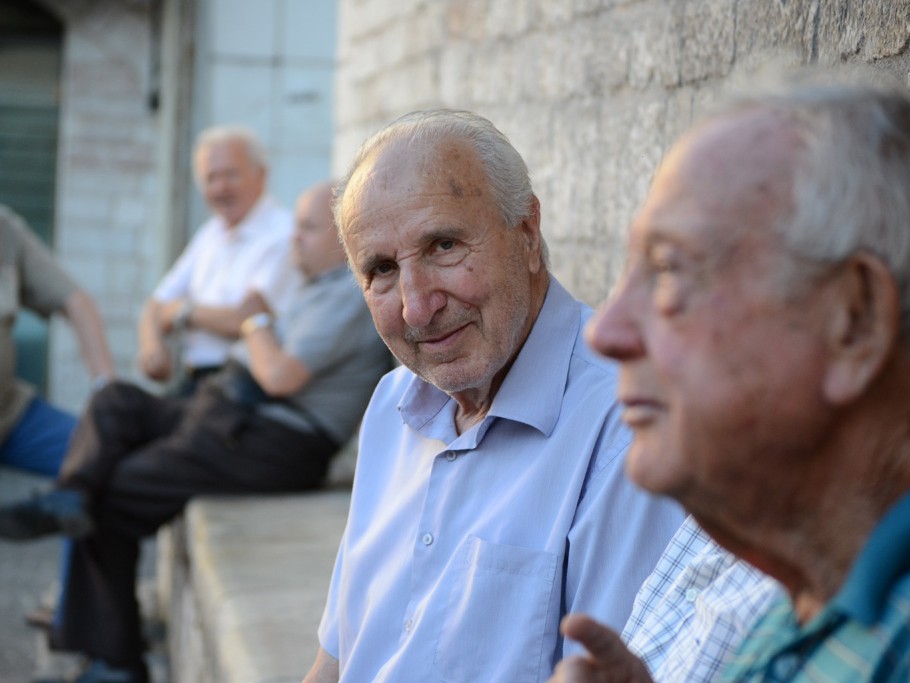 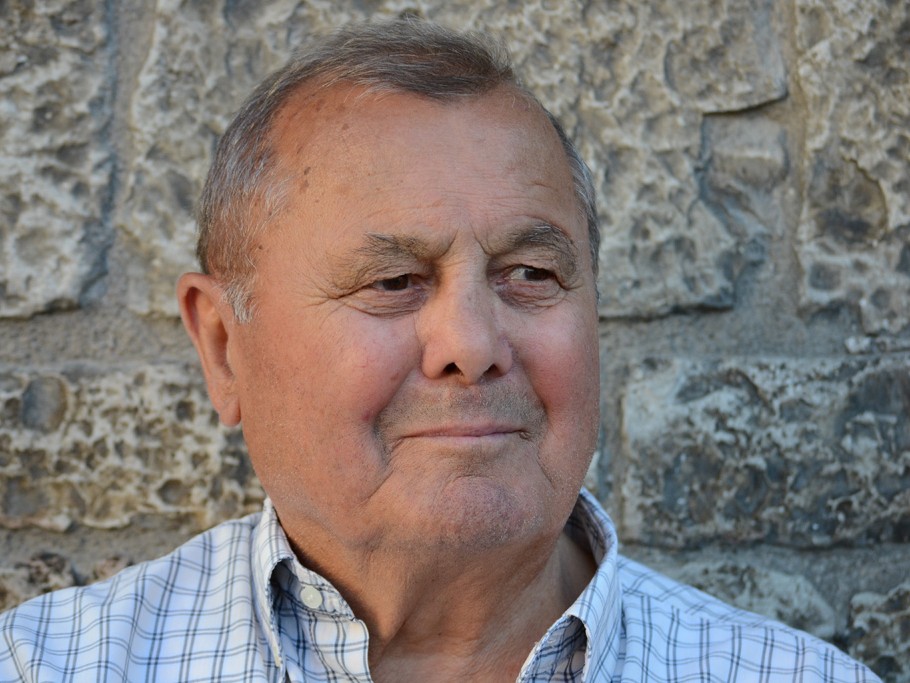 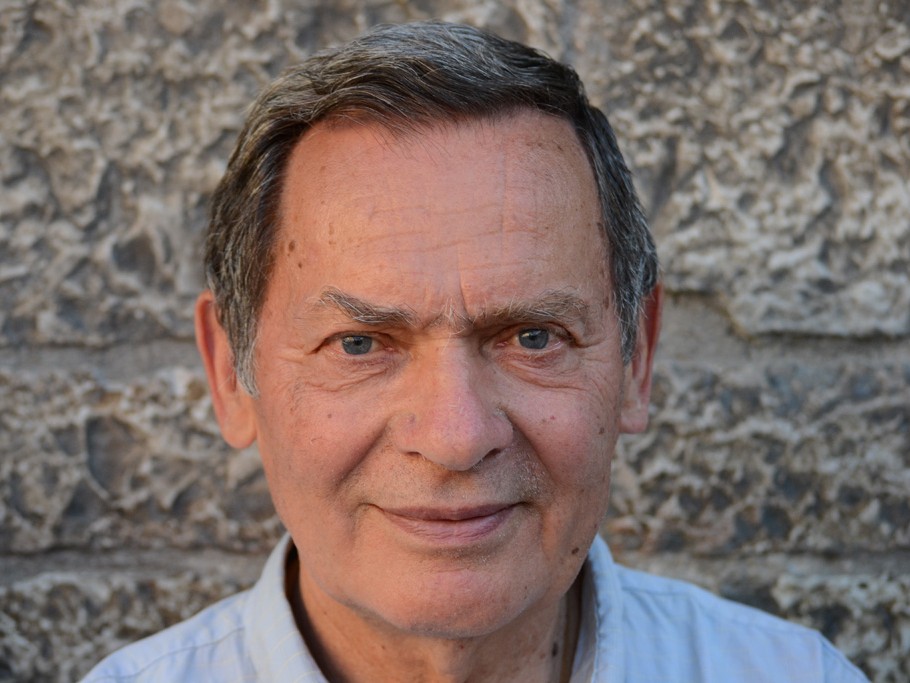 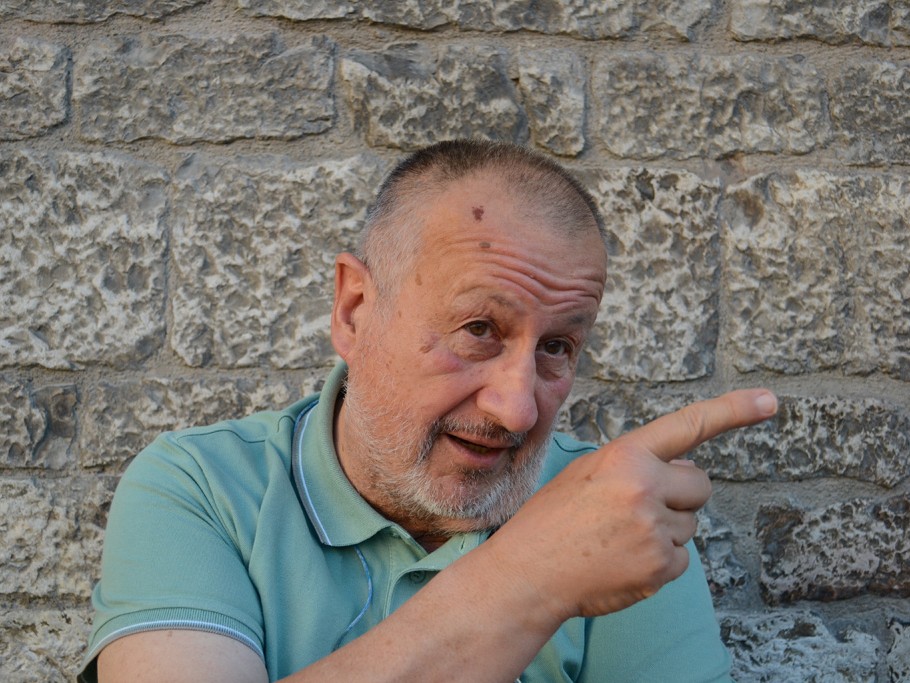 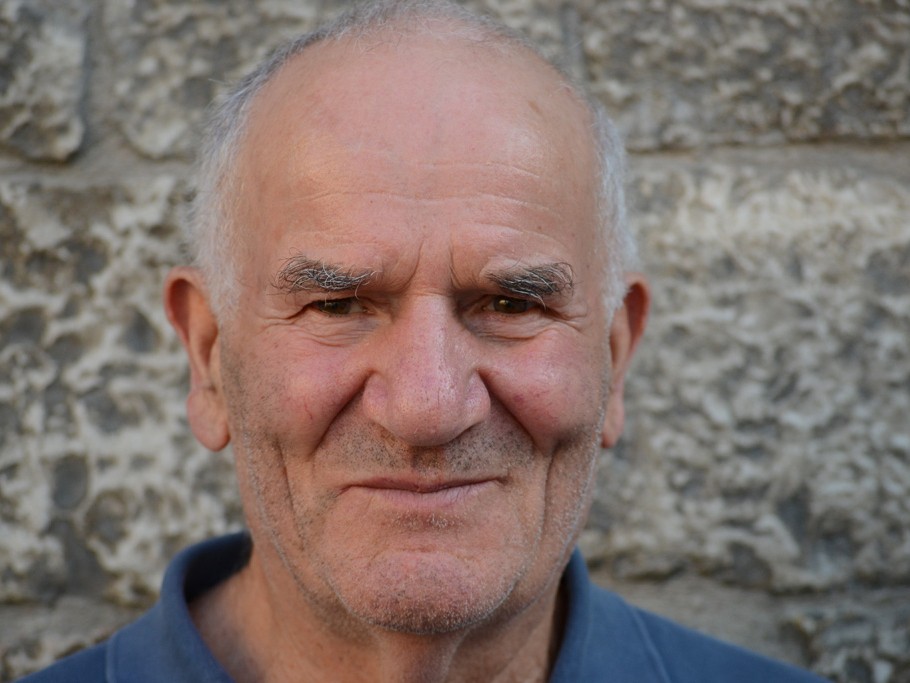 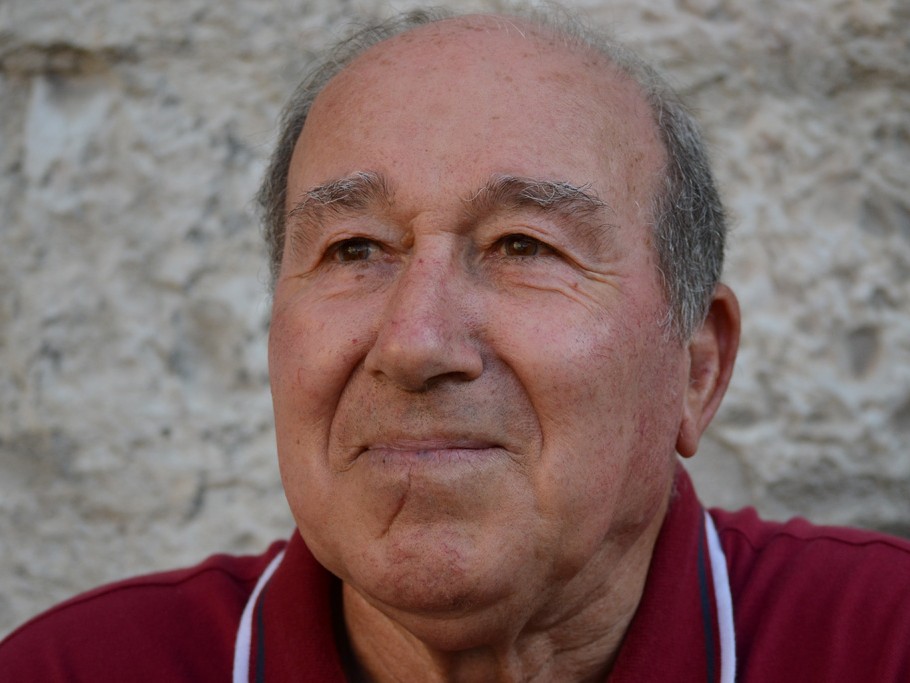 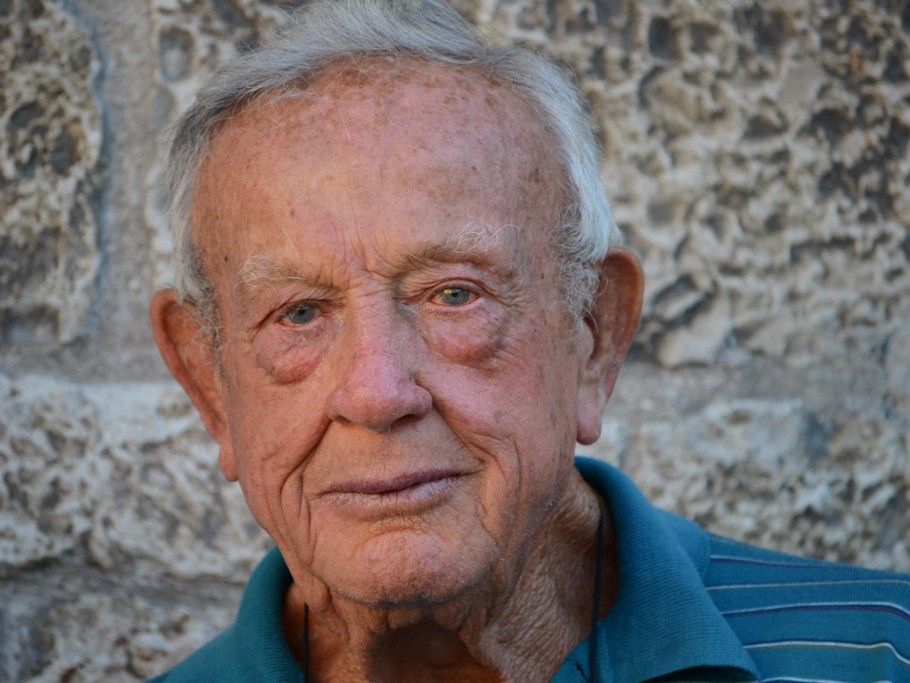 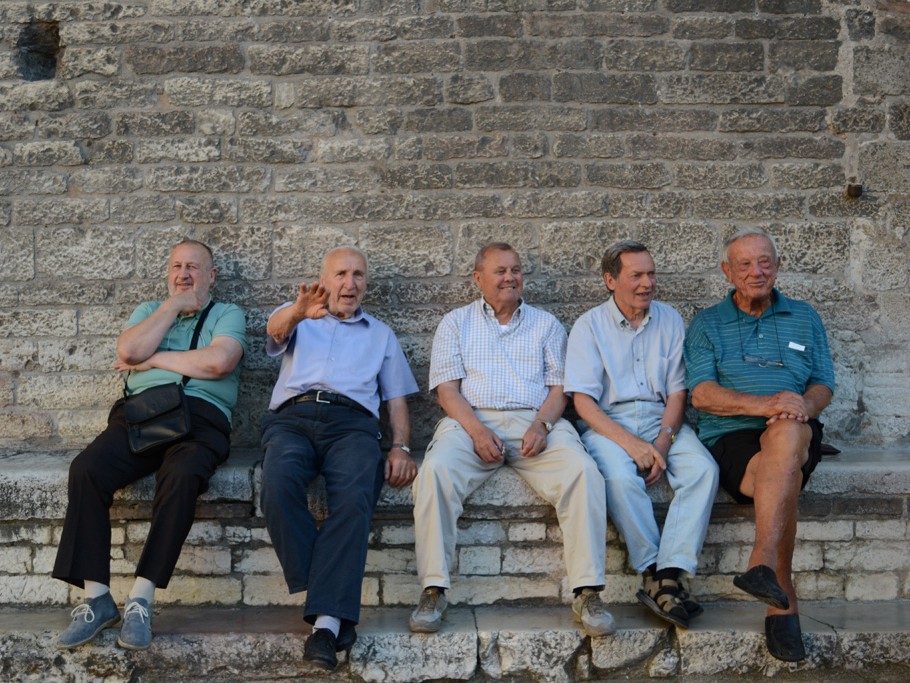 An older gentleman with piercing blue eyes rests his wrinkled hand against the cool stone. It’s five in the afternoon and he is perched along a recessed partition in front of city hall in the small town of Cagli, Italy.

The wall, as it is commonly referred to, serves as a bench for many of the town’s locals. As the gentleman sits, he eagerly checks his tarnished gold pocket watch. “At five o’clock I am always looking at my watch. If someone is late I start to worry that they might be found in the cemetery,” jokes Giovanni Buroni, a former professional rugby player and frequent wall inhabitant.

As the church bell rings, more men pour into the piazza. One by one they join Buroni on the wall, gathering like birds on a wire. The men greet each other with warm smiles and the usual friendly banter. “We enjoy passing time here. When we are together, we have no mercy,” declares Franco Donati, a portly man with a cheerful disposition.

The men have known each other since grade school and have been coming to the wall for as long as they can remember. “It feels like we’ve been sitting here all our lives,” chimes Giuseppe “Peppe” Foresto, as his mind starts to wander and a reminiscent grin crosses his face.

These old friends congregate in the same spot, day after day. The only time they did not visit the timeworn wall of city hall was when they left Cagli for work. “We all left because we had no other choice, but we came back to Cagli because it was the best choice,” recalls Donati.

The locals joke that the wall is the last stop for Cagli’s oldest generation before the cemetery, but to Buroni and his friends this old wall is the keystone to Cagli’s center and the root of their happiness and health. “The more we sit here and laugh with each other, the better we feel,” explains Buroni.

Similar to the cold stone of the church located in the piazza—formally called the Duomo—with a hard exterior that houses an exuberant and ornate interior, the men who sit on the wall with their stern gazes are full of passion and zest. On any given day, Buroni and his friends can be found arguing over politics, their hands waving feverishly in front of them. Moments later, they have forgotten their quarrel and laugh so hard their complexions are red as the vine-ripened tomatoes from the local produce shop.

Resting against the wall, the men silently survey the bustle of their picturesque city, watching over the piazza as though they are the guardians of Cagli. Similar to soldiers on the frontline, their gentle eyes are fixed on the horizon, spotting familiar friendly faces and wide-eyed, upturned heads of visitors.

Although the men often sit in silence with their faces as unyielding as the stone behind them, much of their conversations revolve around the day’s gossip and women. “We sit here because it has an incredible view of all the good-looking ladies,” Donati says with a quick wink and a sly smirk.

As the men sit, gently weaving in and out of conversation, time seems to pass too quickly. The bell chimes again, slowly ringing in the seventh evening hour. Gradually, the men gather their belongings and make their exit.

As Peppe leaves, he looks back at the wall with a smile. “We try to get away from each other, but we never can. It always seems like we end up right back here.” He then offers each of his friends a warm handshake and saunters out of the piazza, chuckling to himself with the thought of returning tomorrow.

The men steadily begin to dissipate leaving Buroni sitting in silence. After a few moments pass, he takes a deep breath, smiling as he enjoys the whirling scent of sweet gelato and spicy espresso in the air. Exhaling, he leisurely checks his pockets ensuring he hasn’t left anything behind.

The ashen stone wall is empty, leaving no physical trace of its daily occupants. It is cold, hard, and lifeless. To many, the wall of city hall is merely a weathered stone bench. The bench tells no story; it is of no significance.

To Buroni, however, the wall is everything but that. This wall holds the memories of yesterday and the promises of what tomorrow will bring. Just before exiting the piazza, Buroni takes one last look at his beloved spot and murmurs, “It is simply the best.”