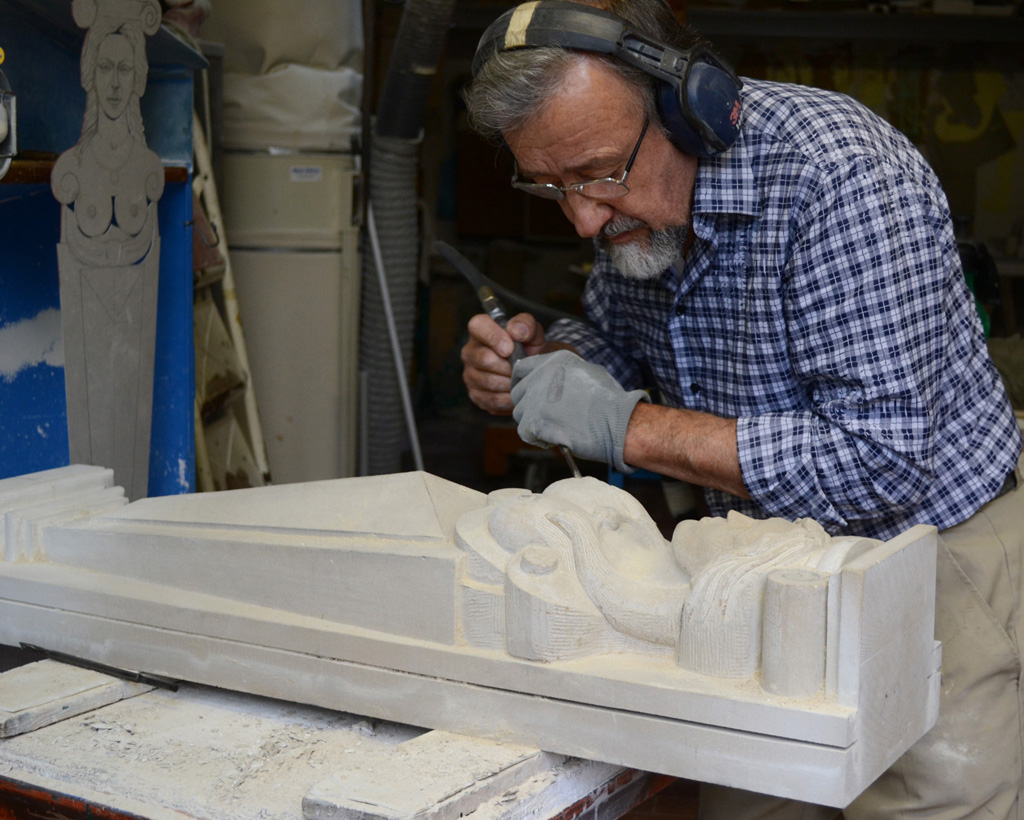 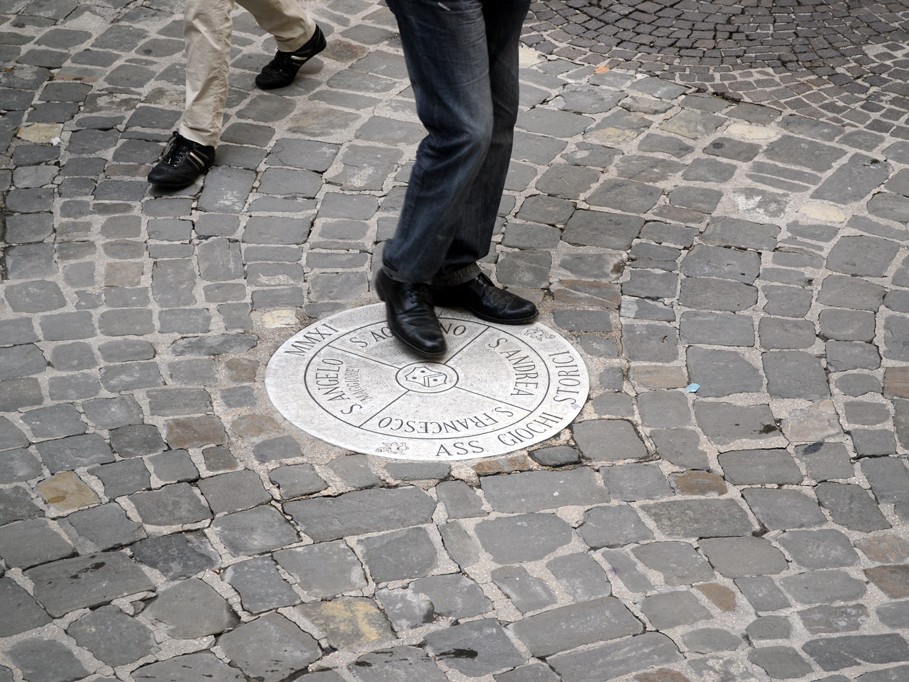 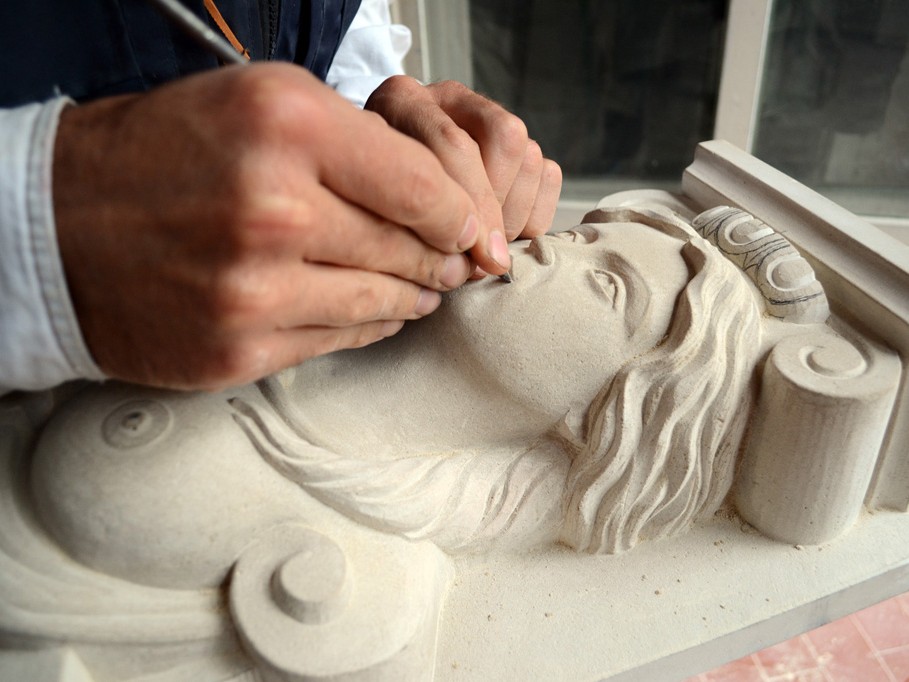 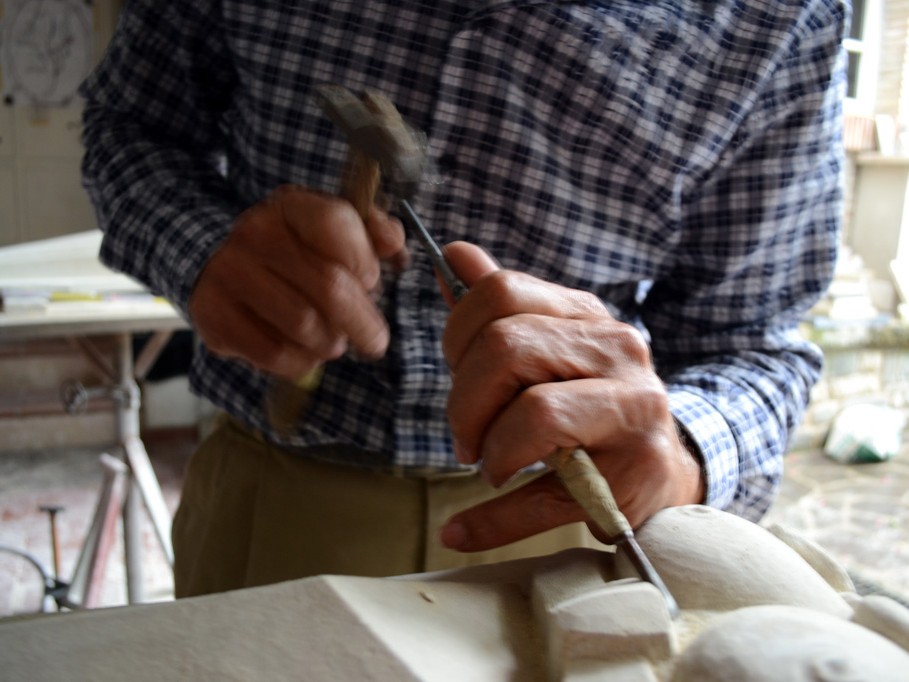 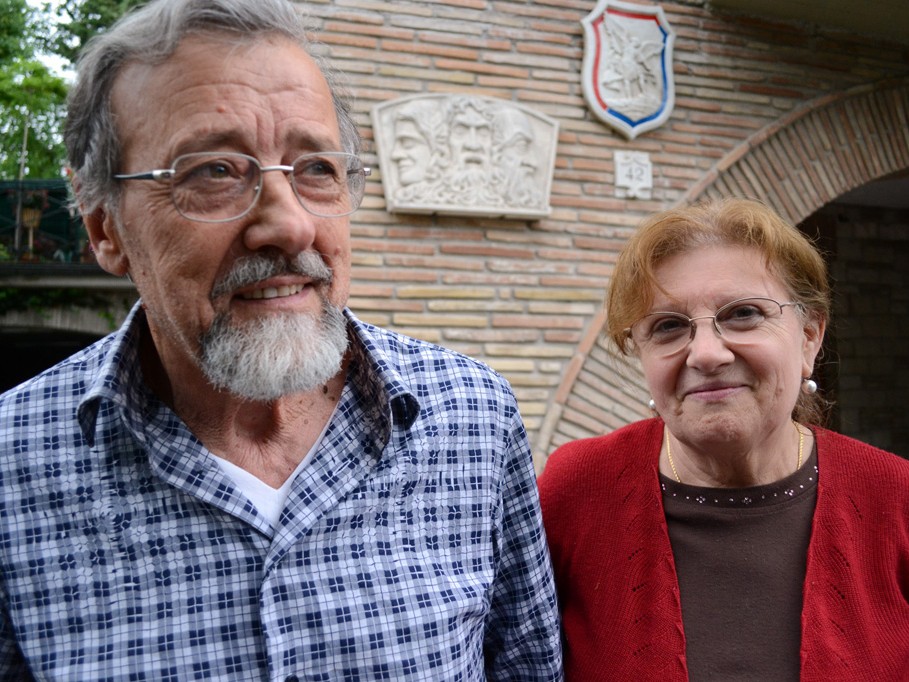 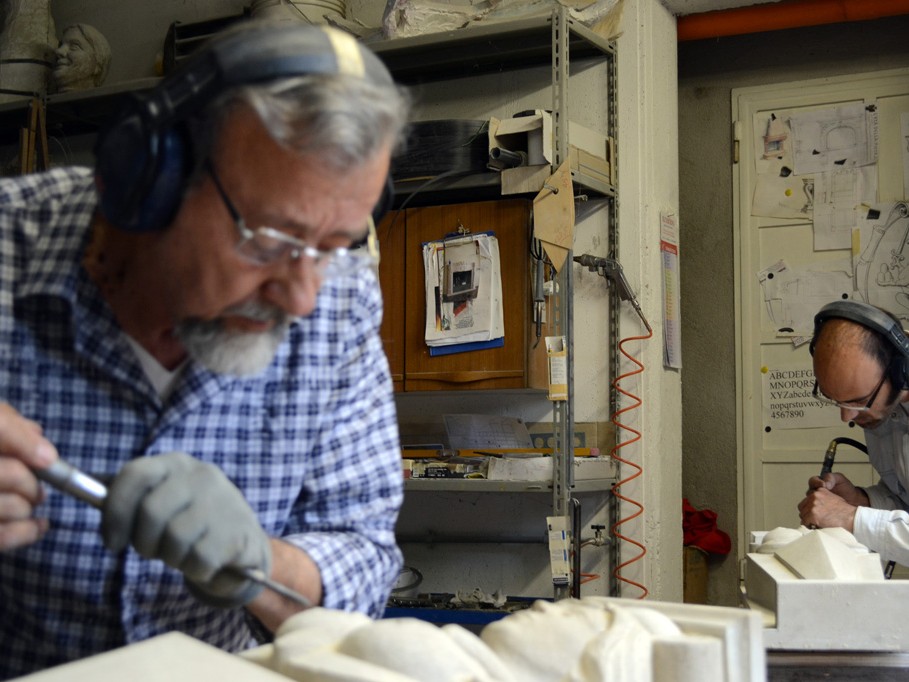 Paolo leans in, peering at her perfectly chiseled face, her defined features casting dancing shadows on the table.  Squinting, he moves in closer, sensing an invisible imperfection.  His chisel rests comfortably between his thumb and forefinger.  With a few small strokes, he intently completes his task, and then leans back and wipes droplets of sweat from his furrowed brow.  Paolo glances at his son Ettore, who is working silently nearby. He ignores the swirl of dust surrounding his spectacles. Sensing his father’s gaze, Ettore raises his head and both nod slightly in approval.  Father and son have worked side-by-side for years, developing a comfort and unspoken language that’s as palpable as the misty air.

Paolo Gambioli was born in Cagli, Italy and raised on Via Lapis, the street that now bears the stone medallion and family crests he sculpted.  As a young man, he dreamed of becoming an artist, and he attended the Cagli Art Academy to pursue these aspirations.  Shortly after graduating, he met Rosina; they fell in love and soon married.  Needing a stable income, he found work as a fire fighter. For nearly 30 years, he served Cagli and supported his family. However, his work as a fire fighter did little to squelch his dream of being an artist. “I needed something to occupy me during my free time as a fireman, so I took up painting and sculpting,” Paolo casually remarks. Paulo learned to sculpt and paint in art school, but it was his wife, Rosina, who nudged him to join a sculptor’s guild.  This was the turning point that allowed him to transition his art from hobby to profession.  In a twist of irony, he began sculpting custom stone fireplaces, now starting fires instead of stopping them.

Milan influenced his art. Paolo spent his first three years as a firefighter in Milan before returning home to his native Cagli. Stunned by the smog that greeted him every day in Milan, he channeled these feelings into some of his more visceral paintings.  “In Milan, I couldn’t breathe.  The smog was killing me,” he explains as he admires a painting of a woman outdoors in distress. “The female is nature; she is Eve.  She is a beautiful creation, but man comes along and destroys it.”

Paolo slowly stands and reaches into a bookcase overhead; his neatly tucked plaid shirt spills out of his creased, wheat-colored trousers.  His long, weathered hands heft a bulging photo album to rest on a knotted oak table.  The album’s faded and worn cover shows repeated use, yet the photos of his pieces rest neatly inside.  Skimming the worn pages that show a lifetime of his artistry, he pauses often on works of special interest or significance. Custom stone fireplaces, family crests, medallions, and sculptures leap from the pages; much of his work now graces the homes, churches, or public spaces in and near Cagli. Monte Nerone, a nearby limestone peak, provides the raw materials for his sculptures; these slabs of stone are hauled to his showroom and lab just outside of Cagli.

Suddenly, the adjacent room erupts in noise as two young girls bounce in, engaged in play.  The older girl springs forward and turns on the television, filling the room with the sounds and songs of a familiar children’s show.  Upon seeing them, Paolo’s face visibly softens, and catching his eye, the younger one races over to tickle him. Playing along, Paolo laughs before returning the playful gesture before the girls slip away, laughter echoing down the hall.

Lingering a few moments to gaze after them, Paolo then blinks, pulling himself back into the moment. “Although I have a working lab just a few miles away, I prefer to bring smaller stone slabs home so I can work here, near my wife, my grandchildren and my son,” he remarks. As he speaks, he and Rosina exchange knowing looks that are born from four decades of marriage.

Most days, he and Ettore work side-by-side in the garage attached to the family home.  He has spent years mentoring his son on the art of sculpting, with the hope that his son carries on the family business long after Paolo lays down his chisel and brush for the last time.  “You can’t teach sculpture,” he says, “you have to show it. The beauty about sculpture is that it lives on forever.”